Nihilego (ウツロイド, Utsuroido) (codenamed UB-01 Symbiont) is a Rock/Poison-type Pokémon introduced in Generation VII. It is an Ultra Beast, one of the several species of Pokémon native to Ultra Space.

Nihilego's exact bodily functions are unknown, however, it is known to be somewhat parasitic in the sense that it's much stronger when it has a host. Its also not known what exactly its tissue is made of, but according to several official sources, it's said to be made up of a glass-like material that is flexible like rubber. As such, it is a genderless Pokémon. It somehow resembles a jellyfish.

As implied by its title of Symbiont, Nihilego is specialized towards influencing other Pokémon to protect itself and its nests. It generates a neurotoxin that simultaneously gives those injected with it great power while reducing their inhibitions and sending them into an agitated, often violent state. The ultimate goal of this is for the infected Pokémon to attack and destroy any natural competitors for itself and the Nihilego. It is heavily implied that the violent behavior of other Ultra Beasts is due to acting under the influence of Nihilego venom.

Nihilego is based on a jellyfish. Its mind-numbing poison may be based on the neurotoxin produced by the Portuguese man-o-war. Its appearance mostly pulls inspiration from the glass jellyfish, hence the Rock-type. It being a parasitic jellyfish may be a reference to Nintendo's Metroid series of video games, in which the titular creatures are alien parasites which typically resemble jellyfish and attack by latching on to their victim's head (though, ironically, their Rock-typing makes them strong against Ice-type attacks, whereas Metroids are typically weakened by ice) and/or to myxozoans, parasitic animals closely related to jellyfish. With the theory that the original seven Ultra Beasts are based on the Seven Deadly Sins, Nihilego may be based on the sin of envy, as it usually takes over others and uses neurotoxins that have similar effects to Id, an instinctual drive that forces those to seek what they desire, even if it means taking or wanting the pleasures owned by others. Its English name, mind-control abilities, extradimensional nature, and the appearance of its homeworld may also be in reference to the Nihilanth, a being capable of mind control that came from a parallel world called Xen that serves as the final boss of the first Half-Life game.

Nihilego is a combination of nihilist (a person who believes all life is meaningless and that there is no God), nihil (Latin for "nothing"), ego (the mind space in which there is separation between consciousness and unconsciousness), and geode (referring to its part Rock-typing and its see-through appearance). 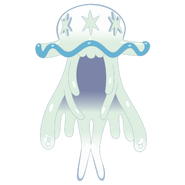 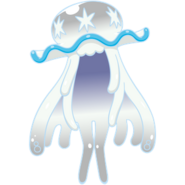 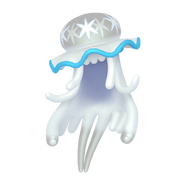