Nidoqueen (Japanese: ニドクイン Nidokuin) is a Poison/Ground-type Pokémon introduced in Generation I that is the female counterpart to Nidoking.

Nidoqueen is a large pokemon, with features resembling a rhino, mouse, and reptile. She is largely blue in color. Nidoqueen has large round ears and two small horns in the center of her head. Her jaw is cream colored. Nidoqueen has short legs and arms with white claws (two on her feet and three on each paw) and a large bulky tail. Nidoqueen also has a couple of cream, armor like scales on her body. Alongside her jaw, other parts include two armored lumps on her upper chest and a segmented piece on the abdomen.

Nidoqueen is a large, powerful, bipedal Pokémon. She has thick yellow armor plates all over her. Her horn is smaller than Nidoking's, but it's still strong and produces large quantities of concentrated venom. Nidoqueen can use powerful moves such as Body Slam to paralyze her foes and then finish them off with Mega Punch or Iron Tail.

Nidoqueen can have either the ability Poison Point where a foe has 30% chance of being poisoned or Rivalry where if the foe is the same gender Nidoqueen's attack will be higher.

Gary's Nidoqueen was seen in A Tent Situation, The Ties That Bind, and Can't Beat the Heat.

Mewtwo stole and cloned Fergus' Nidoqueen. The Clone was seen in Mewtwo Strikes Back and Mewtwo Returns.

She is based on various mammals such as Hamsters, Rabbits, or Mice. As well as being based on some reptiles, mostly theropod dinosaurs. Her name is possibly a combination of a parody word of needle and queen. Again, the plates on her chest and abdomen were obviously designed to resemble a bikini. 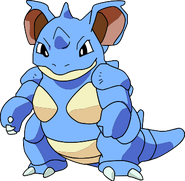 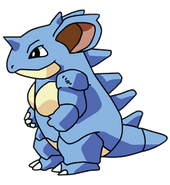 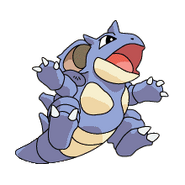 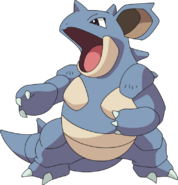 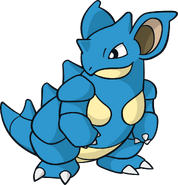 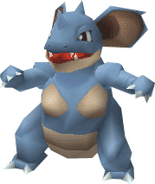