Nickit (クスネ, Kusune) is a dark-type introduced in Generation VIII.

Nickit is a fox-like Pokémon with a slender body and a large head relative to its body size. It has long, black ears, white spots on its head that resemble eyebrows, markings around its eyes that make it look like it's wearing a mask, and yellow eyes. It also has small white dots around its mask. Nickit has tuffs of fur on both sides of its head. It has a white belly and chest; the rest of the fur is an orange-maroon. Its feet are black and its tail is long, has a black tip, and resembles a sack of stolen items.

Nickit are cautious Pokémon that steal food from others. They silently raid food stores and take off with their meals, erasing their tracks with their tails and leaving no sign of their presence. They diet on food stolen from other Pokémon and humans, sometimes including Pokémon Eggs.

Purrloin is their rival, while Boltund is their natural enemy.

Their foot pads are extremely soft and create very little sound when moving.

Nickit evolves in Thievul at level 18

A group of Nickit appear in "Settling the Scorbunny!", where they were led by Goh's Scorbunny in Galar the region. they eventually had to say goodbye to their leader after realizing it wanted to be with Goh.

Nickit is based on a red fox kit. Its tail resembles a sack of stolen items. Its face resembles stereotypical depictions of burglars and may also draw inspiration from the Guy Fawkes mask. While walking, it dusts the ground behind, referencing the practice of burglars cleaning their steps behind them in order to not get caught.

Nickit is a combination of nick (meaning to steal) and kit (a baby fox). It might also be a pun on "Nick it" meaning "to steal". The "nick" in its name may also allude to Nick Wilde, a fox character from the 2016 Disney movie Zootopia who starts off as a con artist. 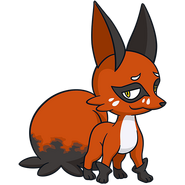 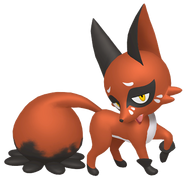