New Bark Town is also a home to the lab of Professor Elm who possesses the starter Pokémon for Johto: Chikorita, Cyndaquil and Totodile.

Located in the southeastern edge of the Johto region, New Bark Town is small, sparsely populated, and windy. The town has only four buildings, with the player character's house being on the east side and near the water. In Pokémon HeartGold and SoulSilver, the town also has four windmills, with each one being next to a corresponding house.

The player begins in their room. When the player goes downstairs, they are given their Bag, Trainer Card, Save Menu and Options Menu by their mother who also asks the player to visit Professor Elm for a Pokémon. As player walks out, a Marill starts jumping in front of them who later walks away upon seeing their trainer (who is Lyra if player is male and Ethan if player is female). When player enters Professor Elm's Lab, they are asked by Professor Elm if the player would keep their Pokémon out like Player's Counterpart (Ethan/Lyra) does. The player cannot deny. He later asks player to go to Mr. Pokémon's House with a starter Pokémon.

When player will be on his way back to New Bark Town, the player will get a PokéGear call from Professor Elm. When player reaches New Bark Town again, they found that one of the starters is stolen (the one which has advantage over player's starter). Police Officer doubts if the Player is thief but player is supported by Ethan/ Lyra who tells that a boy with red hair did it. Player then gets to name the boy (rival).

Player then departs on their own journey and later has to visit New Bark Town for many occasions such as for showing the Hatched Togepi to Professor Elm (if successfully hatched), and to collect saved money from player's mother (if allowed her to).

When the Elite Four and Champion are defeated any time, the player begins from their room in New Bark Town again.

New Bark Town is shown to be quite a bit larger in the Pokémon Adventures Manga, including amenities such as a general hospital. It is a hometown to Gold. Being a resident of the "Poke-house" Gold has a local fame in the area even before he became a Pokedex holder.

In Don't Touch That 'dile, Ash and his friends arrived at New Bark Town after leaving Kanto.

New Bark Town is derived from the fact that it is the starting point for the player, as well as a reference to the fact that all of Johto's towns are named after plants. 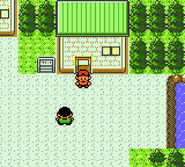 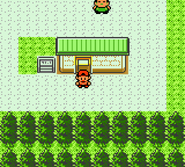 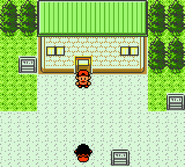