Nessa in other languages

Nessa is a Gym Leader and a user of Water-type Pokémon.

Nessa is a tall, slender black girl with long blue and black striped hair and blue eyes. She wears a gym uniform consisting of a white crop top and shorts with blue and orange details as well as a number 049 on it. For accessories, she wears hoop earrings, two armlets, a Dynamax Band and a single blue glove on her right hand. She also wears a belly chain and white and blue sandals with buoys on them.

Her rare League Card depicts her with her hair more wavy, along with a beige-colored dress and red strappy high heels.

Underneath her seemingly composed exterior through her calm tone when she speaks, Nessa actually conceals a burning heart on battling with massive competitiveness and indomitable willpower. As her type preference suggests, she is a strategist that relies on powerful Water types to suppress and eventually overwhelm opponents' Pokémon. 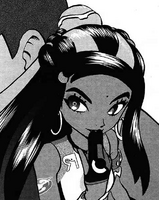