For the variant appearing in the games, see Nanu.

Why Not Give Me a Z-Ring Sometime?

Nanu is a character appearing in the Sun & Moon series.

Nanu is an old man with grey hair, red eyes, and thick eyebrows. He also wears a burgundy shirt with a black jacket on it that has two yellow emblems on the sides (presumably to indicate that he is a police officer). He wears long black pants with sandals. He wears a Darkinium Z as a necklace.

Nanu is a laid-back man, who rarely does his duties, unless the land and the people of Ula'ula Island are in danger. Despite his lifestyle, his battle style is about foiling his opponent's strategies and catching them off-guard, whether through his Pokémon's moves or by belittling his opponent. He also tends to lie to others to get out of his duties.

Nanu was one of Giovanni's accomplicies, and were sometimes in contact together. However, at one point, Nanu became an Island Kahuna and a police officer of Ula'ula Island.[1]

Per their boss' advice, Team Rocket sought Nanu out at the police station on Ula'ula Island. There, they encountered some Alolan Meowth, who robbed them off their food. Nanu came out to see what was going on, and thought the theft was just bad luck. As Team Rocket went away, Nanu wondered if there was someone they were supposed to meet. The trio replied they wanted to meet the Island Kahuna, Nanu. Nanu lied that man went to do some training, which could take an indefinite amount of time. Team Rocket left, while Nanu was glad to have them off his back. When the spirit of the Greedy Rapooh was unleashed, Nanu tried to track it down, and found his niece, Acerola.

He went after the Greedy Rapooh with Acerola, and was surprised to see Team Rocket in action. He tossed them a Z-Ring, which they used to have James' Mareanie use Black Hole Eclipse. The Greedy Rapooh was nevertheless happy to be with Acerola, but Nanu threatened to seal it back into the mound if it misbehaved. Acerola confirmed that Nanu could do that, even if he was, deep down, a nice man. Team Rocket found out that he was the Island Kahuna, which annoyed Nanu that his identity was uncovered, and knew these three have been sent by Giovanni. Still, he let them keep the Z-Ring he gave them, and Acerola's Mimikins gave them a Mimikium Z for Jessie's Mimikyu.[2]

Nanu was walking down the road, and yawned. Officer Jenny visited him and applauded him for patrolling the roads, but suspected he may have also been lazying off. Nanu returned to the police station and fed his Meowth, then started playing. However, Giovanni of Team Rocket called him over the phone, calling Nanu as his old friend, but surprised that he became an Island Kahuna. Nanu brushed Giovanni off, who noted why he became the Island Kahuna, and wanted to ask more about the Blinding One. Nanu claimed someone else was calling him, and hanged up the phone call. He came outside, stunned to see his Meowth involved in a fight with Ash and Poipole. Despite the fight, Ash asked if Nanu was the Island Kahuna. Nanu lied, denying he was the Island Kahuna, and claimed he was patrolling the road.

He did note Lycanroc and Poipole's presence, and the latter shot some red ink at Nanu, who let Ash remain at the police station until the Island Kahuna returned. Later, Nanu came into the Ula'ula Island's library because Acerola took his toy, and fell into her "trap", as he revealed himself to be the Island Kahuna to Ash. Ash wanted to challenge Nanu for a Grand Trial, who refused, believing Ash had to train more, claiming he should return to Melemele Island. Acerola glared at Nanu, thinking he was just lazy to take Ash on, and proposed a "pre-trial" to see if Ash was worthy enough. Nanu grudgingly accepted, and sent Krookodile against Ash's Lycanroc. During the fight, Lycanroc was overpowered and refused to obey Ash, and was eventually defeated. Nanu stated Ash was not ready, but sighed, as he let him train on Ula'ula Island.[1] Nanu was playing at the police station until Team Rocket had visited him. They wanted to know where their enemy with Pikachu was. Nanu fooled them by pointing at the abandoned Thrifty Megamart on the map, which excited Team Rocket, who went there. Soon after, Ash and Acerola came, which displeased Nanu that he was visited so often today. Since Ash wanted a Trial, Nanu let Ash face the people that visited him, and let Acerola be the judge of that battle. When Ash won the Trial, Nanu visited him, grumbling that he passed the Trial and was permitted to take on the Grand Trial.[3]

Before Ash's Grand Trial, Nanu gave an offering to Tapu Bulu in the Ruins of Abundance. He met Ash at the battleground, and let him know that he wanted this to be done quickly. After making a quick prayer, he declared the start of the Grand Trial, where Ash had to use only one Pokémon against Nanu's three Pokémon. Ash was not pleased with these odds, but accepted the match, considering Nanu expected a lot, else he'd have to give up. Nanu thought Ash was just confused, and asked if he was really dedicated for the match. Ash confirmed this, so Nanu sent his Krookodile. Nanu had his Krookodile foil Lycanroc's attacks, and attempt to enrage it by getting it muddy with Mud-Slap. Lycanroc remained calm, but Nanu suspected that Ash didn't want it to get into close combat with Krookodile, who would use Counter. Ash had him proved wrong, as Lycanroc used Accelerock and defeated Krookodile before it could use its move. Nanu complimented Lycanroc, and frowned when Ash became even more motivated to fight. He sent Sableye, who bound Lycanroc to a spot with Mean Look and executed its attacks. Nanu thought Lycanroc was evading attacks to become stronger, while enraged. Lycanroc retaliated with Stone Edge, and defeated Sableye.

Suddenly, Tapu Bulu arrived, and gave Lycanroc a berry to recover. Nanu saw that he could not go against the guardian deity's wishes, though still frowned. With the final Pokémon, an Alolan Persian, Nanu jeered Ash and his bond with Lycanroc, stating the latter would've been more powerful without its trainer. Ash became upset, and Lycanroc took damage from Persian's Dark Pulse. Ash noted Nanu succeeded in distracting him, and Lycanroc even attacked Ash. Ash realized that Lycanroc's rage was to make it powerful, and decided not to pay attention to Nanu's insults. Nanu was amused by this comeback, and had Persian use the Z-Move Black Hole Eclipse. To counter, Ash's Lycanroc used its own Z-Move, Continental Crush, and stopped Nanu's Z-Move. Soon, Persian was defeated, and Nanu became impressed with that accomplishment. Instead of Darkinum Z, he gave Ash a Lycanium Z. As Ash sailed away from Ula'ula Island, Nanu admitted to Acerola that that Ash was an interesting guy, and he did enjoy the Grand Trial, stating he had to give his very best to challenge Ash.[4]

Nanu was praying at the Ruins of Life for the Manola Festival, with Tapu Bulu watching him from behind. Nanu believed the Radiant One should save the sun and moon emissaries, since they have saved it once. Acerola scolded Nanu to pray properly, else the Radiant One won't come to their rescue.[5] Nanu rallied the people of Ula'ula Island to give some of their Ultra Aura to Necrozma, and he gave prayer for the latter's restoration. In addition, he had his Persian use Black Hole Eclipse Z-Move, to pass the Z-Power to Necrozma.[6] Professor Kukui gathered the Island Kahuna, as well as Lusamine, to tell them about the idea of an Alola Pokémon League. Nanu pledged his support, and gathered with the rest on Aether Paradise Island, where Kukui announced the opening of the Alola Pokémon League. Nanu pointed out that Kukui wanted to renew the customs, by opening the Pokémon League. Later, the news reporters continued to interview him.[7] Nanu was at the Alola Pokémon League with the rest of the Island Kahunas, where they acted as judges for the Battle Royal. After the preliminary round was over, he took a nap in his apartment, where Acerola resided.[8] He was watching the first round of battles during the Pokémon League.[9]

Nanu was judging the battle between Sophocles and Mina, which the latter won. He also judged the battle between Jessina and Jamexio, which the latter won. While he observed Kiawe and Acerola's battle, he noted that she had brought the Greedy Rapooh with her.[10] Nanu was watching the battle between Jamexio and Gladion. Nanu noticed that Gladion had Lycanroc use Continental Crush to counter Jamexio's Mareanie's Black Hole Eclipse, in the same way Ash did during their Grand Trial. Later, Nanu was expecting Ash and Hau, and claimed he almost thought they wouldn't arrive. Regardless, he was the judge of the battle between the two boys.[11] Nanu looked at Rowlet's cloak, and decided to keep it for the rest of the battle. Nanu continued being the referee, and was amazed at how impressive Ash and Hau were. When Rowlet and Decidueye clashed, only the latter stood up. Nanu declared Hau to be the winner, but Hala stood up, pointing that Rowlet merely fell asleep, much to everyone's shock. Nanu realized he was wrong, and apologized to Ash, then had the battle resumed. When Decidueye fainted, Nanu declared Ash to have won the battle.[12]

Nanu watched the battle between Guzma and Lana.[13] Nanu and the rest of the Island Kahuna were watching the semi-finals, featuring Gladion and Kiawe.[14] Later, Kukui went to Nanu, reminding it was his turn to be the referee. Nanu commented Ash was a crazy kid to face against Guzma, while Kukui asked of Nanu to judge fairly. Nanu was hoping this won't be a match with any problems, and Kukui hoped that, too. Nanu was the referee for the battle, and announced the same rules applied as the last one: a 2-on-2 battle. With Scizor fainted, Nanu proclaimed it was unable to battle, which made Guzma deeply disturbed.[15] Nanu continued to act as the referee, and announced that Ash's Torracat and Guzma's Golisopod were unable to battle, thus making Ash the winner of that battle.[16] The Island Kahuna watched the finals from the stadium, as Kukui was the referee for the battle between Gladion and Ash.[17] The Island Kahuna witnessed Ash being the winner, and attended the ceremony, where Masked Royal gave him a cup. However, they were shocked to see a Guzzlord appearing from an Ultra Wormhole to the stadium.[18]

Hala, Olivia, Nanu and Hapu gathered at the stadium, and asked of others to help evacuate the people. Ash pointed out that Guzzlord's weak spot was its second face. The Island Kahuna sent their Pokémon out, but Guzzlord's loud howl nearly blew them away. In that moment, the four Guardian Deities appeared and held Guzzlord, letting the Island Kahuna devise a plan to blow Guzzlord through the Ultra Wormhole. Hala and Olivia's Hariyama and Lycanroc toppled Guzzlord down, while Nanu and Hapu's Persian and Mudsdale blew it away into the Ultra Wormhole, using their Z-Moves. Seeing the Ultra Wormhole closing, the four Island Kahuna smiled for their success.[19] The next day, Olivia, Nanu and Hapu watched the final battle - the exhibition match - between Professor Kukui and Ash.[20][21][22][23] After the League was over, Kiawe decided that his next goal would be to master Z-Moves and finish his Island Challenge, which included defeating the Island Kahuna Nanu.[24]

With Ash's departure from Alola region, Hau, supported by his grandfather, took on Nanu's Grand Trial, using his Decidueye against Nanu's Persian.[25] 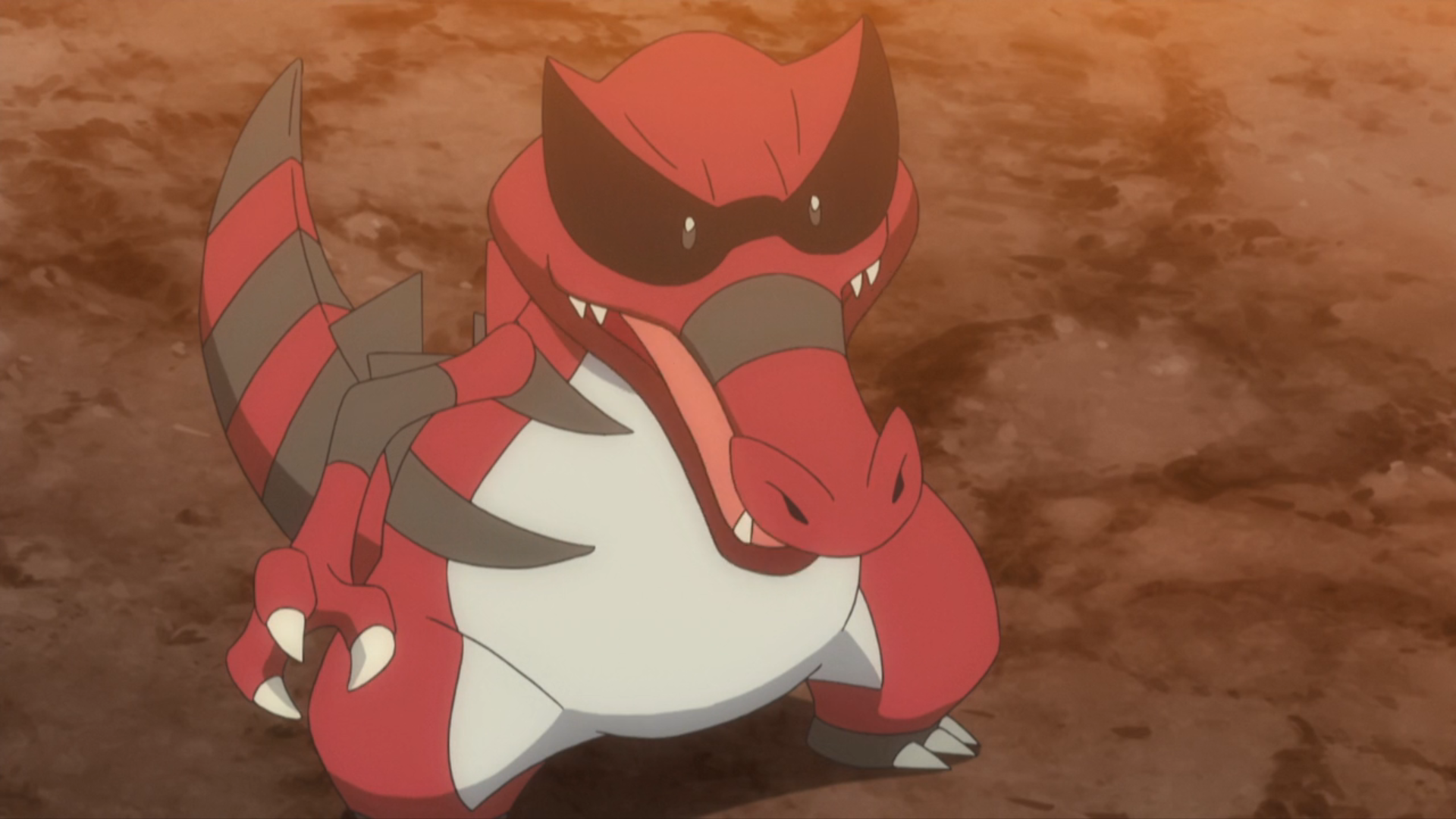 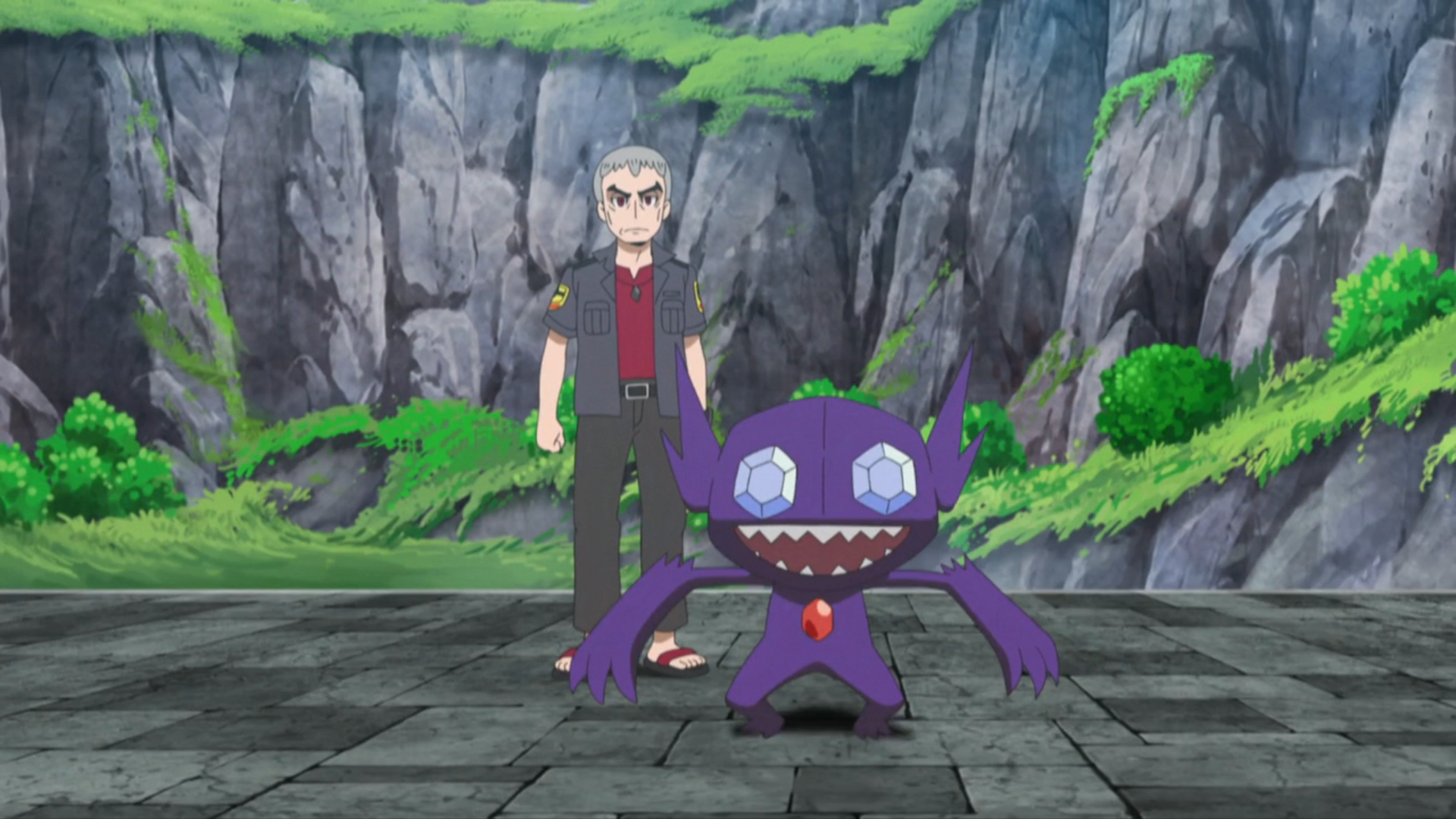 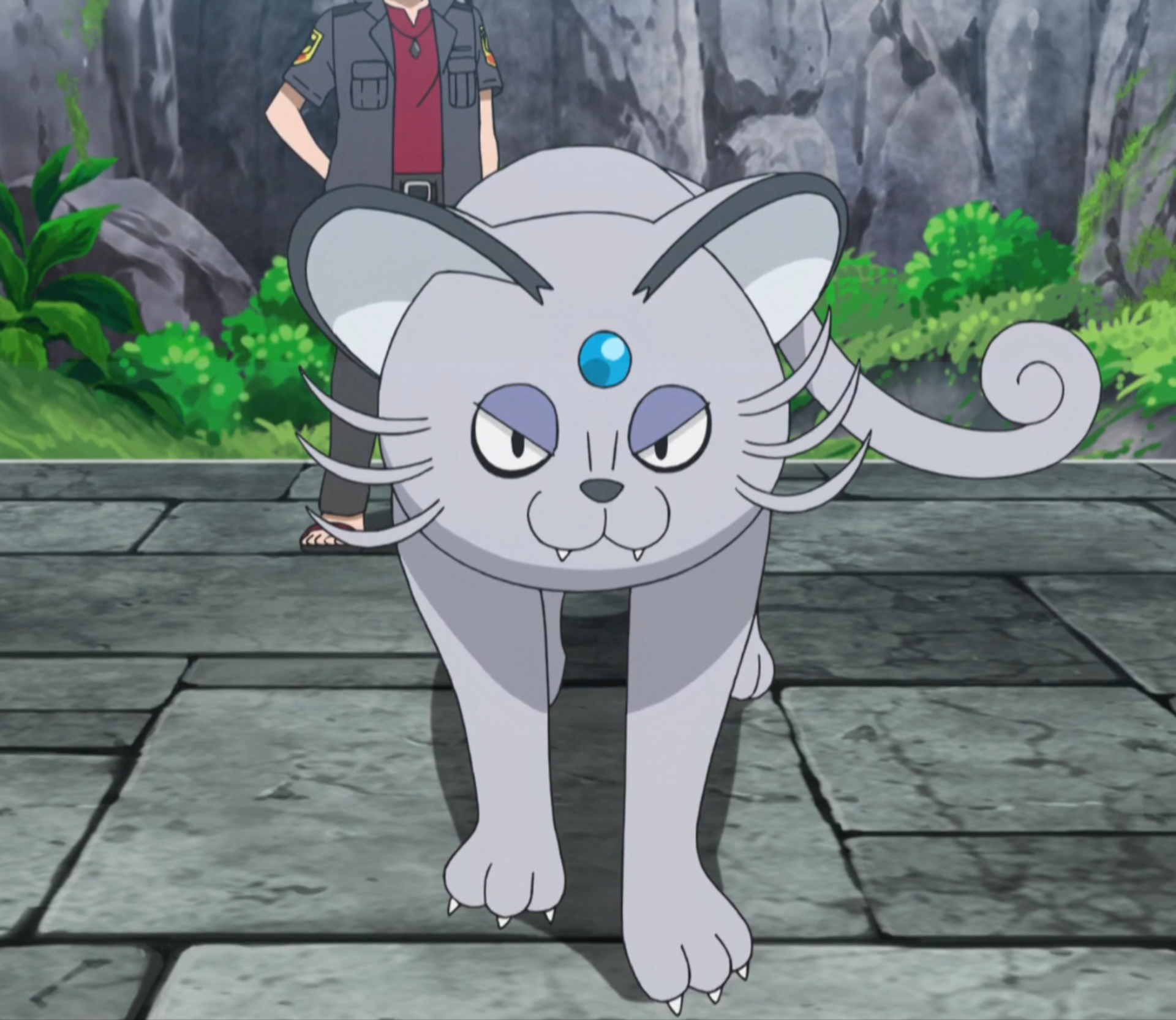 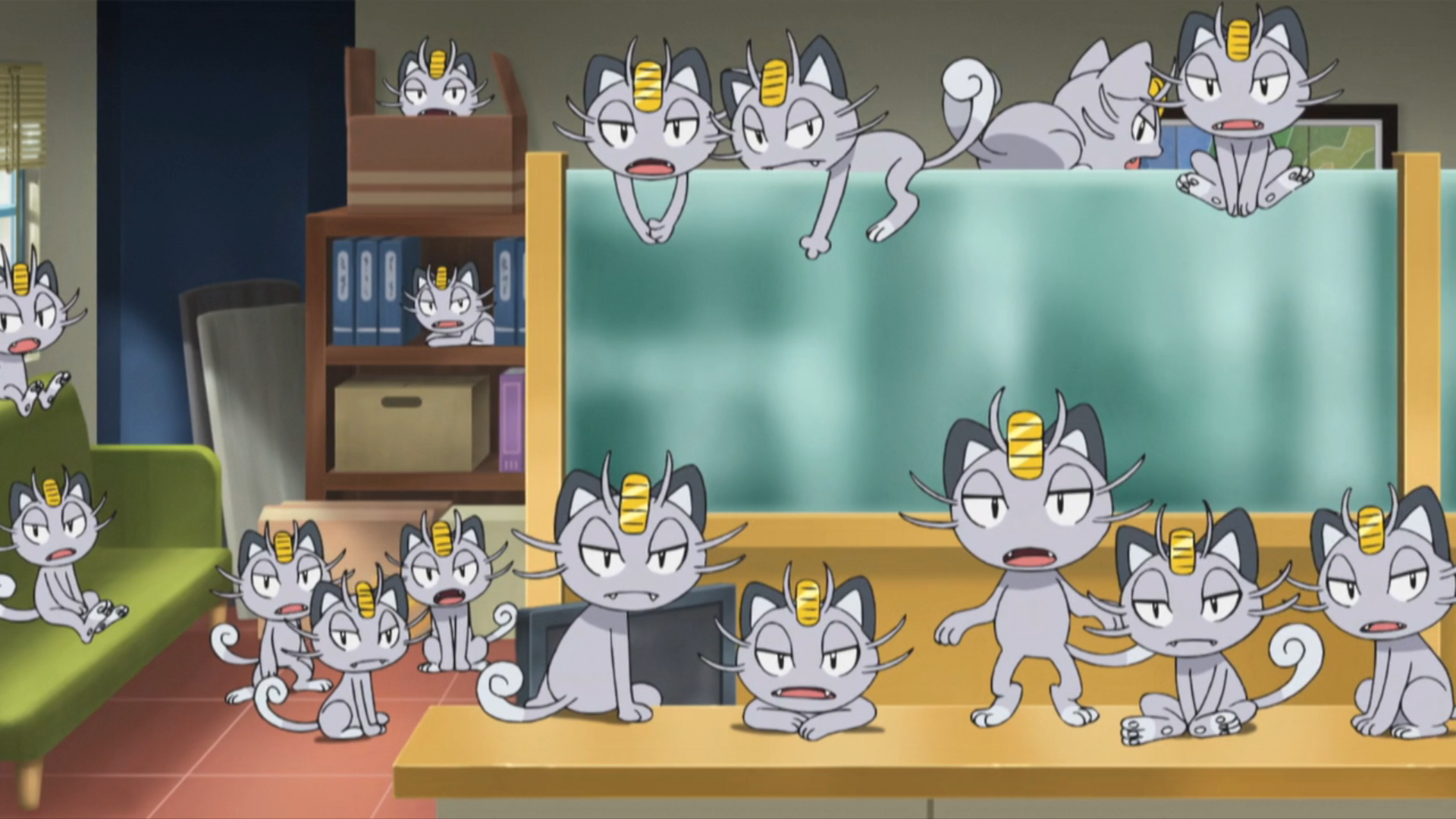 Retrieved from "https://pokemon.fandom.com/wiki/Nanu_(anime)?oldid=1217513"
Community content is available under CC-BY-SA unless otherwise noted.