Nanu is a character appearing in Pokémon Sun and Moon.

Nanu is an older man with gray hair, red eyes, and thick eyebrows. He also wears a burgundy shirt with a black jacket on it that has two yellow emblems on the sides (presumably to indicate that he is a police officer). He wears long black pants with sandals and is also seen wearing a necklace with Darkinium Z on it.

Nanu, overall, is a rather gloomy and cynical character who rarely sees the brighter side of things. He is also rather lazy as he allowed Team Skull to take over Po Town as he feels he has no time to mess with them. Although he accepted to be a Kahuna since he was chosen to be it, he turned down the offer to be in the Elite Four simply because he had a choice to decline and allowed his niece Acerola to take the role instead. However, once he has had a good battle or something amuses him, he will crack a small grin. He also lightens up more by the end of the main story congratulating the player character for becoming a Champion.

Nanu lives on Ula'ula Island where he was chosen as the Kahuna by Tapu Bulu. Even despite his lazy personality, Nanu couldn't turn down the offer chosen by one of Alola's Tapus. Later, Nanu joined the police force and worked close by Team Skull simply because the rent was low as most people rather avoid Team Skull. However, Nanu didn't believe he had the time to deal with them and allows the gang to take over Po Town. Nanu eventually runs into the player character where he is mildly shocked to hear they are going to save a Pokémon (a young girl's from Po Town) and allows the player character inside Po Town despite knowing the full risks. 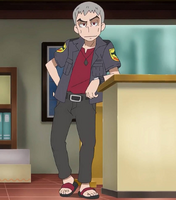 Nanu in Pokémon the Series (anime) 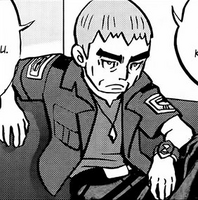 Nanu and his Persian with Grimsley in the Masters trailer (anime) 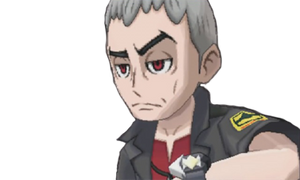 Nanu's VS sprite in Sun & Moon