Naganadel (アーゴヨン, Aagoyon) (codenamed UB Stinger) is a Poison/Dragon-type Pokémon from Generation VII. It is one of the Ultra Beasts introduced in Pokémon Ultra Sun and Ultra Moon.

Naganadel is a large purple striped Pokémon that has both draconic and insectoid features. The top half of its body is slender with thin arms and fuchsia tipped claws. Both shoulders have gray spikes. Naganadel possess purple draconic wings, which it uses to fly. These wings have a single fuchsia claw at the joint and darker purple membranes. At the end of its long neck is its head, which has a large spiked crest and gray face spikes which act as mandibles when it opens its mouth. Its glowing cyan eyes are conjoined, giving the appearance of a visor. The lower half of its body is an abdomen that resembles a wasp's abdomen. There are three gray spikes on the end of the abdomen, with the middle one being the largest and resembling a hypodermic needle or a wasp's stinger.

Naganadel's main stinger can eject a powerful, adhesive, and luminescent poison at a distance of over six miles. The abdomen contains hundreds of liters of this poison, as well as the Ultra Beasts' brain. The stingers on their abdomens are directly connected to their brains, and they will react with violence if they are touched by anyone.[1]

Ash's Poipole evolve into a Naganadel and return to Ash to help him battle against the Guzzlord at the Manalo Conference in "Z-Move Showdown!"

In the anime, Naganadel appears as a leader of the pack of Poipole, also one of them who lives in its homeland.

Naganadel is based on a dragon. It also resembles insects such as bees and wasps, while its stinger resembles a hypodermic needle.

Naganadel comes from Nāga (an ancient snake/cobra that spit dangerous venom, as well as an Indonesian/Malaysian name for dragon) and Nadel (German for needle).

Its Japanese name, Agoyon, is a mix of 顎 ago (jaw), ago (Italian for needle), agony (pain), dragon, 四 yon (four, as four is considered unlucky in Japanese culture due to the fact that it can be read as "shi," meaning "death") and 용 yong (Korean for dragon). 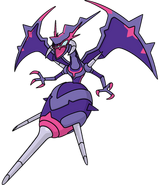 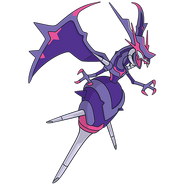 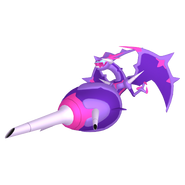 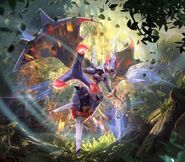