In the Wild
This Darmanitan is a fire-type Pokémon owned by N.

N was dreaming about himself as a child being with his Darmanitan, Woobat and Zorua,[1] to which Black's Musha ate the dream, and showed it to White and Black, which led the latter to believe that N wasn't a bad guy.[2]

Alder's Escavalier and Bouffalant faced against N's Archeops and his Darmanitan. Archeops went after Escavalier, but dodged it. They began back-to-back dodges until Escavalier jumped above the Zen Mode Darmanitan and struck one of its side with Twineedle, while Bouffalant struck the other with Megahorn, defeating the Pokémon.[3]

Before the final phase of the plans at the Pokémon League would begin, N released his Darmanitan and other Pokémon, but was okay with the fact if they chose to follow other people.[4] 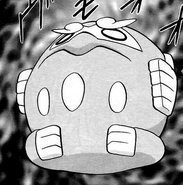