Natural Harmonia Gropius, or more commonly known as N, is a major antagonist of the Black and White versions. His full real name is never directly revealed in game, but his surname is (as revealed by Ghetsis between the final two battles against them) Harmonia. The name is first discovered written on N's basketball in his playroom. He is the nominal leader (or, as said by Team Plasma members, the king) of Team Plasma. He also has the ability to understand and speak to Pokémon.

N is a tall, thin young man. He is fair-skinned with blue eyes and long tea green hair tied into a low fluffy ponytail and shorter streams framing his face. He wears a white, mid-sleeved shirt with a black shirt under it, a pair of cider green slip on shoes and beige skinny fit pants, with a cube attached to his chain near his left hip. N also wears a black and white bracelet on his right wrist, a yellow rectangular tri-bracelet on his left, and a blue and black pendant on a chain around his neck. His most notable feature is his hat, which is white and black with a black peak.

N is deeply attached to Pokémon. By growing among abused Pokémon, he grew to resent humans, avoiding contact with them. As a result of this he decided to become the hero of the Unova Legend so that he could free Pokémon from humans. While his intentions are indeed noble and born from what he truly believes is right, this also shows his naivety and innocence, failing to realize both that he's being manipulated, and that his views are extreme as not all humans mistreat Pokémon. As former nominal leader of Team Plasma, he can be quite serious. He's protective of his followers, confronting the player character himself/herself to buy enough time for his men to escape. In spite of this, he also remains a teenager and can enjoy things such as an amusement park.

Eventually he comes to realize his mistakes and tries his best to improve the relationship between humans and Pokémon.

Prior to the events of the game during his early childhood, he was forced by his adoptive father to grow amongst abused Pokémon, thus growing resentful of humans. N then decided to become the "hero" of a Unova legend, a hero who once along the Legendary Pokémon (Either Zekrom in White or Reshiram in Black) fought many battles against people who stood against his views and successfully managed to unite people's hearts thus creating the Unova region.

Later on, Ghetsis asks him for his help to separate Pokémon from humans, which he agrees to and is crowned King of Team Plasma by Ghetsis.

A certain time after that he's present during Ghetsis's speech about Pokémon and humans in Accumula Town, and when he and his subordinates leave, he talks to the player character's Pokémon and asks it about its thoughts. Not given the answer he expects, he decides to battle with his only Pokémon, after which he retreats.

He's later seen in Nacrene City after the player tries to enter the museum. N shows himself and decides to challenge the player with a completely new Pokémon team, however he is unsuccessful and leaves seeking more powerful "friends" to help him.

The third time he is seen is in Nimbasa City in the amusement park, where he invites the player to go with him to the Ferris wheel, showing a childish personality for the first time. When the two of them enter the wheel, N reveals his status as the King of Team Plasma, and what his objective is. After descending from the wheel N and the player are interrupted by Plasma Grunts, who are looking for their "lord". N promises them that he will bide time to let them escape and battles the player a third time. However he is once again defeated and claims that he is going have the power of the Legendary Pokémon and challenge the Elite Four. He taunts the player, saying if you want to stop him, to collect all eight gym badges and go to the Pokémon League.

N is later seen in the Chargestone Cave, revealing his personal guard the Shadow Triad, three members of Team Plasma sent by Ghetsis to protect N. They plague the player continuously during his travel in the cave by teleporting and forcing the player to go with them. The player is finally able to challenge N after passing through many Grunts in the cave. N challenges the player with his new team made solely of Pokémon found in the cave. N is defeated once more, while berating Pokémon Battles as they hurt Pokémon. Bianca and Professor Juniper soon show themselves, with the latter being questioned by N about how she can give Pokémon to trainers making them "suffer". The Professor only says that their views are different but equally respectable; N is furious and takes his leave.

He is seen again after the player successfully earns his/her 6th Badge. He talks to the first party member on your team that is not fainted, and is happy that the players Pokémon like him, although he's sad that good trainers like you will have to release their Pokémon, too.

At Icirrus City, at the Dragonspiral Tower, N is seen with Reshiram (White) or Zekrom (Black). He captures it, and tells the player to look for the Light/Dark Stone. He then flies off on the legendary dragon, vowing to defeat the Champion.

The next and last time he is ever seen is during the Pokémon League, in which N shows himself along with his massive Castle awaiting for the player who makes his/her way through some Grunts and six of the Seven Sages. You see him defeating the Champion Alder, and is pleased to see the player make it. He waits up in his throne, at the top of the castle. N will be sitting in his throne and will summon either Reshiram or Zekrom, but before they can battle, the other legendary Pokémon awakens to be faced by the player. After being successfully caught, the player faces N (either with the two Legendaries clashing or not). N will use a new and fully evolved team of six Pokémon. Even then, he is defeated and is soon confronted by Ghetsis, who reveals he is N's father and his true plot to rule the world by using N. After Ghetsis is defeated, Alder asks N if he's realized his mistake, however N doesn't answer. After Cheren and Alder take Ghetsis away, N talks personally with the player and walks to the hole that Reshiram/Zekrom crashed through and he throws the Poké Ball. The game ends with him saying "Farewell". After the credits, depending on which version (Zekrom on Black, Reshiram on White), Zekrom/Reshiram is seen flying in the sky, with N on its back. Silver sparkly wind flies across and settles on N and the camera zooms up to his eyes. Then the screen fades to white.

N is mentioned by Looker after all Seven Sages (excluding Ghetsis) are found and arrested. He says that N has been seen with the legendary Pokémon in a distant land.

N in Pokémon the Series (anime) 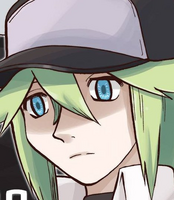 N in the Pokémon Black 2 and White 2 trailer (anime)

N's VS Sprite in Black & White