My Pokémon Ranch is a WiiWare game released in 2008. It cost 1000 Wii Points. In the game, Miis and Pokémon interact. Hayley (the owner of the ranch) gives the ranch six Pokémon. Everyday, Hayley brings a new Pokémon to the ranch, depending on how the player answers her questions, until she has brought a total of 15 Pokémon to the ranch. Also, the player can deposit Pokémon from Pokémon Diamond and Pearl Version. The Pokémon will stay on the ranch unless the person who deposited it in the first place withdraws it. A maximum of 1,000 Pokémon can be stored, and there are certain rewards the user can trade for at certain landmarks, the crown jewel of these being Mew (which is found when there are 999 user-deposited Pokémon). You take care of Pokémon, and use some items, such as the Toy box, Stinky Ball and the Bonfire.

An update to the game has been launched on the Japanese server of the Wii Shop Channel. It allows connectivity between My Pokémon Ranch and Pokémon Platinum, including Giratina's Origin Forme and Shaymin's Sky Forme. It also allows 500 more Pokémon to be stored in the game. Additionally, there are several new items and events included.

Flying Pokémon live mostly in the sky above the ranch. 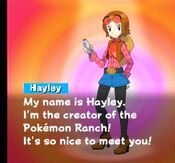 Observing the Miis and Pokémon brings them a strange pleasure...

Round up the usual suspects.

Random 'events' can occur this is one of them... everyone looks at the camera.

Connecting to a DS. 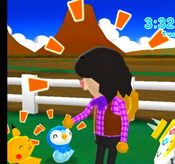 Dancing with the Pokémon.

Now we only have 2

Uh oh, how'd you get out here ditto?

Piplup getting some unwanted attention from Pikachu.

Select a user to associate with a DS cart.

A DS with propellers and a balloon(?) ferry Pokémon from Wii to DS and DS to Wii. 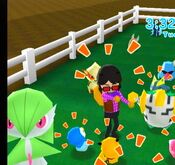 The whole ranch is getting in on the dancing! Except for that Gardevoir who wants to look into your eyes.

No surprise... that didn't last long.

A little bit of info on a sleeping Pokémon.

A new addition to the ranch.

Pre-parade overview of all your pocket monsters.

Parade mode lets you see some stats on your Pokémon, no battle stats for this friendly ranch.

The trading takes place in a whirl of sparkles.

A theological debate is solved. 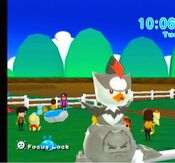 A flying Pokémon happily absconds with a ground-bound beast.

Riding on a Pokémon of adequate size.
Community content is available under CC-BY-SA unless otherwise noted.
Advertisement