Musharna is a round-bodied Pokémon that resembles a tapir. It has a long snout, round ovular eyes with red pupils (only seen when it is awake), small pink dots below its eyes and an ovular opening between its eyes that emits a thick plume of dream mist while it sleeps. The upper half of its body is pastel light pink, and its lower half is violet. It has stubby arms and legs with pink tips. It is often seen levitating while sleeping, curled up in fetal position in midair while emitting great curling plumes of pink dream mist from the opening on its forehead. It is closely related to dreams.

Musharna sleep through the day, only becoming active in the moonlight. Even then, they seem to float in states of half-consciousness, with their eyes remaining closed as they wander about. They very much dislike being disturbed from their slumbers. Like Munna, Musharna consume the dreams of people and Pokémon through the holes on their forehead. However, their Dream Mist is far more powerful and concentrated than that of Munna. Gazing closely at their Dream Mist will reveal fragments of the dreams the Musharna had consumed. Depending on the dreams eaten, their mists can take a variety colors, though pink is the most common. Dark, sooty Dream Mist is said to be especially dangerous. When threatened, Musharna can manipulate their Dream Mist to create physical manifestations of the objects, people, and Pokémon within the dreams they had eaten. The figures created are often indistinguishable from real ones.

Being gentle Pokémon, Musharna tend to obey their trainers during battles, but they are also rather timid and are mostly incapable of retaliating against more intimidating and ferocious opponents. They are usually quite oblivious to their surroundings as well, owing to spending most of their time in slumbering. However, their docile temperament has still made them quite adored by many trainers.

Musharna is the evolved form of Munna. It evolves through the use of a Moon Stone.

Musharna may be based on the Baku, a dream-eating tapir-like creature from Japanese mythology. It may also be based on koro, which are Japanese incense burners that are usually in the shape of animals. It also appears similar to a fetus.

Musharna comes from ムシャムシャ mushamusha (Japanese onomatopoeia for eating, as this Pokémon eats dreams), 夢 mu (dream), and luna (Latin for moon, referencing the nocturnal habits of the Baku). 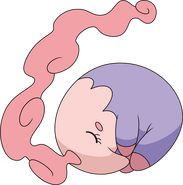 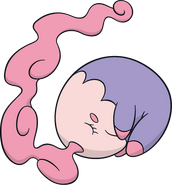 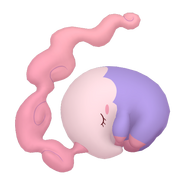 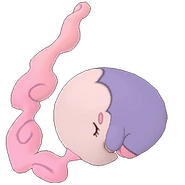 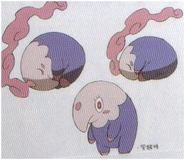 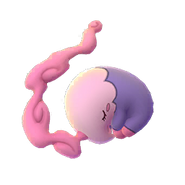