Munna is a small quadrupedal tapir-like Pokémon. It has a round pink body with purple flower designs on its back. It's limbs are quite small and stubby. It floats around without touching the ground and has a small trunk-like snout, and the circular opening on its trunk emits purple dream mist. Its eyes are ovular and red with small black lashes.

Munna feed on the dreams of people and Pokémon alike. They rest in abandoned buildings during the day, cloaking themselves in soporific Dream Mist as protection. At night, they wander about houses in search of sleeping individuals, siphoning their dreams into the holes on their snouts. Their floral patterns light up as they feed. This process is entirely harmless, though these individuals will wake up unable to remember exactly what they dreamed of.

Once Munna consume what they can of the dreams, they then process the remaining substance into Dream Mist, a sleep-inducing fog that they use to protect themselves from predators. If the dreams they consumed were pleasant, then the Dream Mist will be bright pink in color and dissipate fairly quickly once released. Munna that siphon nightmares, however, will expel thick, grayish-purple or black mist and will likely become ill. Munna will aid those suffering from bad dreams by shrouding them in Dream Mist; inhalation of the mist will replace bad dreams with whatever dreams the Munna had consumed before.

Mostly docile, domesticated Munna usually obey their trainers without any hesitation during battles.

Munna's Dream Mist can project the contents of each dream they have consumed.

Munna evolves into Musharna with the use of a Moon Stone.

In the anime, Munna made its appearance in "Dreams by the Yard Full!" A scientist named Fennel has a Munna. It was first seen reacting to Musharna's calling, then seen waking up Axew after it was hit by Musharna's dream mist. It was Munna who showed Axew's dream of evolving into its final evolved form Haxorus.

During the phenomenon, Munna was the only one not affected by the dream smoke since they are drawn to each other.

Munna is likely based on the dream-eating Baku, a tapir-like creature from Japanese folklore, similar to Drowzee and Hypno. It also appears to be based on koro, Japanese incense burners that are commonly shaped in the form of animals.

Munna comes from mu (夢, an alternate reading for yume (dream)), moon, and luna (both referencing the nocturnal habits of the Baku). 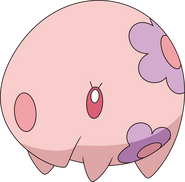 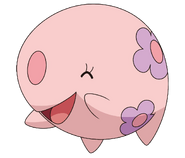 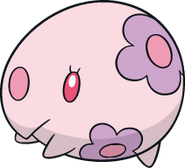 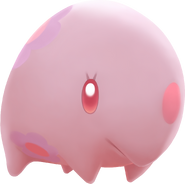 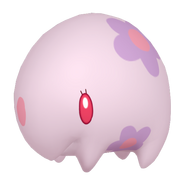 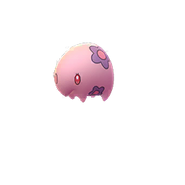