Torrent (not activated yet)
Swift Swim (as Mega Swampert; not yet activated)

Tripped Up by Torkoal
Master Class with Masquerain

This Swampert, nicknamed Mumu, is a water/ground-type Pokémon owned by Ruby.

Mumu is one of the Pokémon that Ruby received during his stay in the Hoenn region, it specializes in Strength Contests. As a Mudkip, it was chosen by Ruby to battle Sapphire's Torchic after Professor Birch tells Ruby that it will be effective against it. After the battle, the professor tells Ruby to keep it. Since it was the weakest member of Ruby's team and since it doesn't have a set contest category and nickname yet, Ruby tries to teach it by letting his other Pokémon perform on a bridge, after trying out all that it could, Ruby doesn't see any improvement and states that it's actually making things worse. So he tries to teach it to be like the swaying leaves of a nearby tree which was revealed to be a wild Dustox, it battles against it using its fin as a radar and shoots the Dustox with a Water Gun on its wings which makes it flee. As a result, Ruby decides on making it specialize in the Strength category of contests and nicknames it Mumu.

In the Chuang Yi translation, Mumu was known as Zuzu. 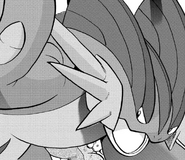 As Mega Swampert
Add a photo to this gallery
Retrieved from "https://pokemon.fandom.com/wiki/Mumu?oldid=1201083"
Community content is available under CC-BY-SA unless otherwise noted.