Mudsdale is emotionally resilient and will not cry or flinch.

True to its stamina ability, it has a robust physique that allows it to endure attacks very well. It mixes its spit and dirt to create special mud. It's mud also powers up its already powerful kicks to the extent that it can demolish a car in 1 kick.

Mudsdale is also very good at hauling heavy loads for extended periods of time without getting tired.

Mudsdale is the evolved form of Mudbray which evolves at level 30.

Mudsdale is based on draft horses. These horses are bred to be patient, have good stamina and strength as well as having a docile nature. They also have more robust builds than other horses.

As for the breed it is based on, it is most likely based on the Clydesdale, which originated in Scotland (which may explain why it is in the Galar Pokédex).

Mudsdale is a portmanteau of mud and Clydesdale.

Its Japanese name, Banbadoro, is a portmanteau of 輓馬 (banba, draft horse) and 泥 (doro, mud). 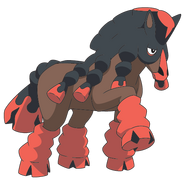 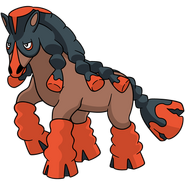 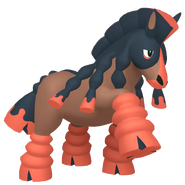 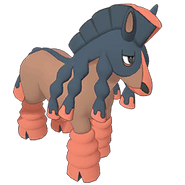