Mudbray has a somewhat chubby brown body with its underside, snout, and cheek being a lighter shade. It has eyes with solid black pupils with no iris. Its mane and tail are solid black in color. The lower legs are a light shade of brown in the shape of mud. The hoof is pure black.

Mudbray love to eat and play in mud. Though they are usually compliant Pokémon when doing so, they can become very defiant when deprived of mud. If kept from it for too long, they will firmly refuse to move entirely until they are allowed to play in the muck.

After eating dirt, Mudbray will combine it with water and other substances inside their bodies to create a special mud that they coat their hooves with. This mud gives them the traction necessary to cross both rough and slippery terrain with ease.

Mudbray is based on a donkey or mule, with its typing based on how donkeys are often trained as beasts of burden.

Mudbray comes from mud and bray (the sound made by a donkey).

Its German Name, Pampuli, is a portmanteau of Pampe (mash) and Muli (mule). 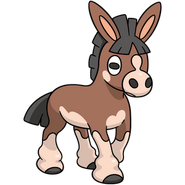 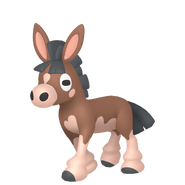