Mr. Rime (バリコオル, Barikooru) is an ice/psychic-type introduced in Generation VIII. It evolves from Mr. Mime in its Galarian Form.

Mr. Rime is a caricature of The Tramp. It has peach skin and big eyes with yellow pupils. It has a moustache and a bowler hat with 2 horns. It retains its gloves and shoes from its pre evolution. It wears a coat with 2 yellow eyes and a large red nose. It also wields an ice cane.

Mr. Rime are skilled tap dancers who will wave their cane in sync to the rhythm of its movements, which are supposedly very popular. The patterns on their bellies exude psychic energy that smoothens their movements and lightens their footsteps; they in fact also act second sets of eyes to help Mr. Rime stay alert to how the audience is feeling.

The face on Mr. Rime's belly can release psychic energy to attack.

Mr. Rime can also wave their canes to freeze moisture in the air around them, creating sparkling flurries that enrapture onlookers. The horns on their heads act like feelers that sense the audience's anticipation, letting Mr. Rime know how to best thrill them with their next moves.

The design of Mr. Rime is based on tap dancers or the British film actor Charlie Chaplin, who's been known for doing comedy in silent films. This is also seen in its Shiny coloration where it is a brown-shaded version of the normal coloration, often seen in old films. It may also be based on Charlie Chaplin's stereotypical Tramp character, who Mr. Rime wears similar clothes to.

It may be based on senior citizens as well, as its evolutionary line starts off with Mime Jr. as a baby, Mr. Mime as an adult, and concluding with Mr. Rime being an elderly person.

Mr. Rime is a combination of "Mr." (an abbreviation for "Mister"), "rime", a form of ice that rapidly freezes due to water, and "rhyme", as some of Britain's most famous comedies were written by poet William Shakespeare. The inclusion of "Mr." also includes the word "mist". 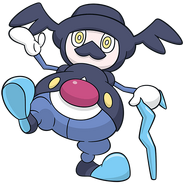 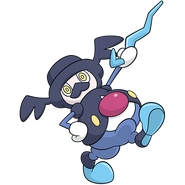 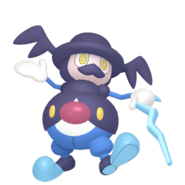