For the variant appearing in the games, see Morty.

Misdreavus Misgivings
Morty is a character that appears in Pokémon Adventures, who is the leader of the Ecruteak City Gym in the Johto region.

Morty is a tall young man with golden-yellow hair and dark peridot eyes.

Morty wears a light blue bandanna on his forehead. His attire consists of a long sleeved shirt the same color as his bandanna with yellow elbows, jeans and sneakers.

Morty wears a purple bandana. He has a purple scarf with red ends and a round-like symbol. Morty also has a long-sleeved striped black shirt, a pair of purple double bracelets around his arms, some white jeans and a pair of black and purple sneakers with red soles.

Morty has a kind personality, as he is shown to do things on other people's behalf. Morty also uses his location abilities for the greater good, as he assists the Ecruteak City townspeople to find lost items. He has exhibited great honour for the legendary Pokémon Ho-Oh, who is one of only two Pokémon that can not be detected by his ability, the other being Suicune.

Professor Elm explained to Gold he researched the metal particles Gold's Aibo had when it scratched Masked Man's mask. Elm found out the mask was made of the material the Gym Badges are made of, including Morty's Fog Badge.[1]

Due to the earthquake in Ecruteak City, Morty had the Tin Tower constructed first, else he would've feared that Ho-Oh would descend and would be angry that its sacred place was defiled by Team Rocket.[2]

Suicune thought of some of the Gym Leaders, including Morty, whom it could face.[3]

Morty appeared at a rural town, whereupon he successfully used his tracking ability to discern the location of a woman's long-lost Girafarig. The woman thanked Morty for reuniting the pair. She then asked Morty whether he could see all things, to which Morty revealed that one Pokémon has been able to elude his vision, the rainbow Pokémon. Morty revealed to the woman that he had been tasked by a man called Eusine to find the legendary Pokémon Suicune, but admitted that he couldn't find it, either. However, she brought a radio before Morty, as a region-wide broadcast announced that Suicune had reawakened. Morty was surprised at this revelation, telling his Misdreavus and Gastly to follow him. As the trio ran through the forest, Morty was enveloped within a deep mist, as he told his Pokémon to remain alert. Morty used his Gastly to disperse the mist, as Suicune rushed from the trees and into the village. However, Suicune found itself unable to move, as Morty's Gastly set out minimal electrical waves throughout the surrounding area through Thunderbolt. Morty resolved to capture the immobile Suicune, as he threw his Poké Ball at the legendary Pokémon. However, the Poké Ball passes right through Suicune, as Morty was immersed in a bright light. Morty discovered that Suicune has disappeared, and has instead been replaced with four versions of itself. To Morty's shock, the illusion shattered like fragments of glass, as he realised that Suicune fooled him by using Mirror Coat. Morty noticed that his Misdreavus has been paralysed due to Suicune's attack, and attempted to search for it with his ability. However, he was unable to find its presence, and ceded victory to Suicune. Morty then called Eusine, informing him of the situation.[4] The tale was told by the Pokémon Association director, who believed Suicune would come to Mahogany Town and challenge its Gym Leader, Pryce,[5] who remembered how it redirected Morty's Misdreavus's attack with Mirror Coat.[6]

Just as Morty was returning to the Gym, he sensed someone present. A trainer told Morty was "the trainer with eyes for thousand miles". Morty thought he was an enemy, as the trainer's Magnemite attacked. Morty had his Misdreavus attack with Psybeam, so the trainer, Lt. Surge, knew Morty was a seer. He approached Morty, who demanded to be freed. Lt. Surge and his Raichu laughed, since they wanted a service from Morty. Lt. Surge showed a Pokédex he managed to take, and some gear belonging to the children he found after battling with the Masked Man.[7] Morty was surprised at this request and was told Lt. Surge wanted to know more about the Masked Man, his new enemy. Despite being attacked, Morty was given money for the service. Either way, Morty focused and sensed the owners of the items Lt. Surge brought were at Whirl Islands.[8]

Morty came to the Indigo Plateau, where he and Misdreavus participated in the Gym Leaders' tournament.[9] Morty took his seat and watched Brock battle Jasmine.[10] He also noted how Janine's Grimer became smaller, due to Minimize, during her battle against Falkner.[11]

Morty faced Lt. Surge in the Gym Leaders' tournament. Lt. Surge's Electabuzz used Thunder, which electrocuted Morty's Gastly. It also hit Misdreavus, who affected Electabuzz with Spite, which made Thunder unusable. Furthermore, Misdreavus used Pain Split, which hurt Electabuzz and healed Misdreavus. Instead, Lt. Surge sent Magnemite, who took Misdreavus' Psywave. Lt. Surge knew Morty was much tougher than he looked, thinking he planned this from the start. Morty exclaimed that the tournament wasn't a showdown between two teams, while Lt. Surge only wished to find the guy that attacked him at Lake of Rage. Both Gym Leaders went to finish the battle, as Magnemite fired Zap Cannon.[12] The attack defeated Misdreavus. Just before Lt. Surge was declared as the winner, his Magnemite fainted as well; Misdreavus used Destiny Bond to make Magnemite faint as well. As the battle was declared as a draw, Morty went to shake Lt. Surge's hand. However, Lt. Surge brushed him off. This angered Morty, while Lt. Surge, who claimed he didn't come here to have handshakes, warned others these Gym Leaders were quite strong.[13]

Morty watched Pryce battling Erika. He noted how impressive Pryce's skills were and felt as if Pryce was hiding something, feeling he could be the Masked Man.[14] Due to Team Rocket having infiltrated into the Indigo Plateau, Falkner battled the grunts. He and the Gym Leaders went into the train, which locked them all in and rode away.[15] During the fighting, Morty was surprised that Lt. Surge managed to separate the carts and had the train go back to the Indigo League.[16] He, Whitney, Falkner and Bugsy came back to the stadium, where they met up with the Pokémon Association director. He told that the Masked Man was not even human, since he had a hole inside his body. Whitney was in shock and remembered something.[17] Along with Whitney, Morty confirmed that the Masked Man was actually Pryce.[18] Morty sensed something among the rubble and found Pryce's cane. Whitney recalled Pryce usually tapped his staff and realized he was sending messages through Morse code. In addition, they found a Pokégear inside the cane, making them realize Pryce arranged his plan from the start.[19]

In the end, Morty returned to his Gym, where he was challenged by other trainers, who wanted to obtain his badge to enter the Pokémon League.[20]

As Silver was trying to find plates that Team Rocket was after, Eusine recommended to Silver to visit his friend, Morty, who may know more about those items.[21]

Morty appeared at the kimono girls' theater. Gold didn't know who he was, to which the kimono girls introduced him as the Ecruteak City's Gym Leader. Gold asked about Jasmine, to which Morty explained that she went to Sinnoh to participate in Contests. Anyway, Morty explained he was patrolling the area, as a lot of people have gone to his Gym to have him use the ability of clairvoyance. The kimono girls explained Morty ran a business involving finding missing people. Realizing Morty could use the ability to find people, Morty asked if he could find Lance. As Gold was searching for Lance's mantle, Morty saw Gold's Pokédex, and realized he was the Pokédex Holder. Morty took Gold to his Gym, where he was called by Chuck, as he, Bugsy and Falkner came to defend the Gym from any suspicious people. Morty also remembered that Lt. Surge was searching for Gold some time ago, which disappointed Gold that it wasn't a girl that was looking for him. Still, Gold saw Morty as a friend, who remembered Gold's deeds at the Pokémon League. Thus, Morty went to use his ability.[22]

Morty was uncertain what he actually saw. He went to draw to Gold what he had seen, but he heard someone knocking on the door, and commented Chuck shouldn't have let anyone in. He went to inspect, and found Silver. Silver showed the Pokédex, to which Morty became embarrassed, as he let in the wrong person in. Morty let Silver into his room, where the latter met Gold.[23] Morty let Gold and Silver meet each other. However, as they started feeling tremors, Morty contacted Chuck what was going on. However, Chuck didn't reply, and Arceus blasted away the Gym, causing Morty to fall down.[24]

Silver and Morty recovered a bit, and the latter was disappointed to see the roof of his Gym being destroyed. Morty explained he had seen Gold going after Arceus, to which Silver knew he was going to stop the enemy. Silver went to fly off on Honchkrow, but Morty reminded him about his task. Silver showed three plates, and told there were thirteen others scattered throughout the region. Morty focused himself, but nearly fainted, as he saw the vision of the giant Pokémon and thirteen other plates. He suspected that the people that were trying to contact him these days had the same idea. Thus, Morty marked the locations on the map, which Silver had Weavile mark the tree, to send information to the other Sneasel and Weavile to help him in the mission. Before leaving, Silver returned the badge he stole from Morty and the other Gym Leaders. Morty reminded they were counting on them, and as Silver flew off, Morty was hoping that Silver could stop the danger threatening the Johto region.[25] 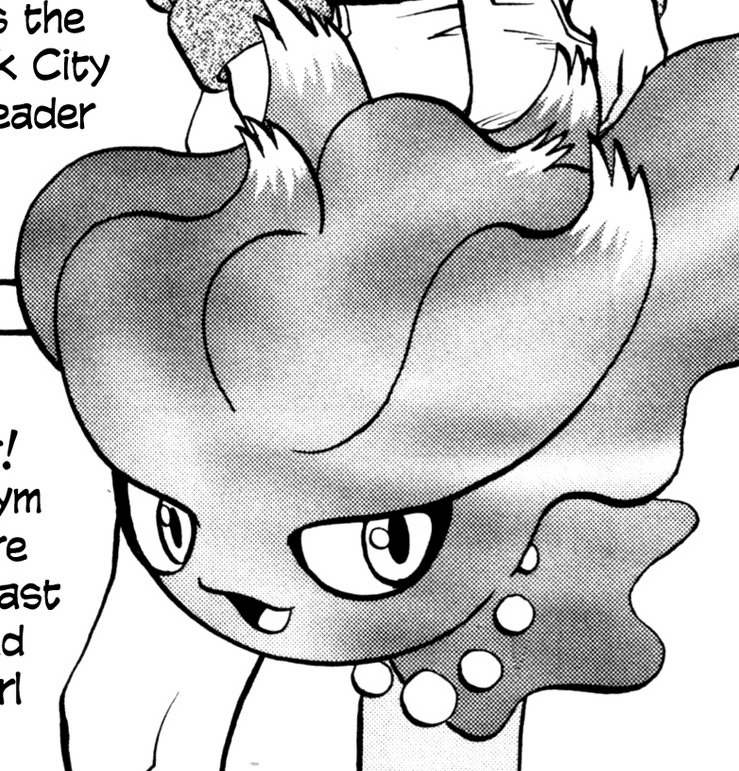 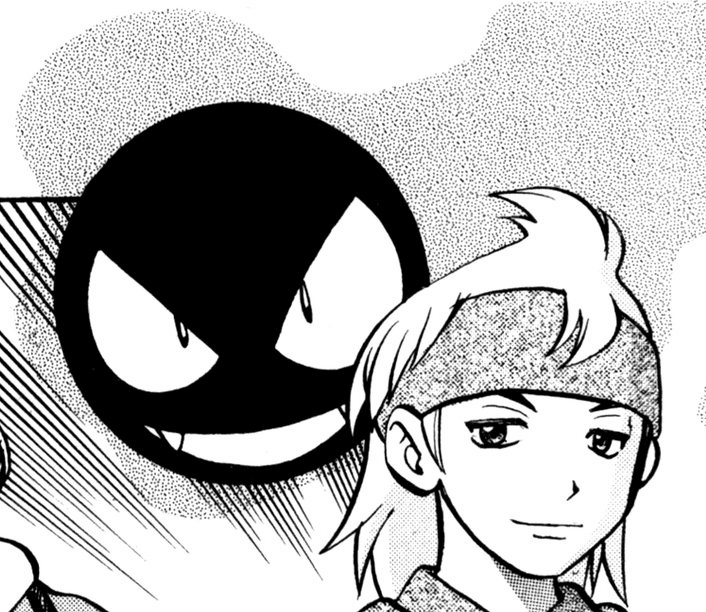 Morty thanked by the townspeople for his efforts.

Morty and Lt. Surge fight in the Gym Leader Tournament.
Add a photo to this gallery

Retrieved from "https://pokemon.fandom.com/wiki/Morty_(Adventures)?oldid=1317107"
Community content is available under CC-BY-SA unless otherwise noted.