The Mystic Seer of the Future

Morty (マツバ Matsuba) serves as the Gym Leader of the Ecruteak City Gym. He specializes in using Ghost-type Pokémon, and holds the Fog Badge for the trainers that defeat him. He is the first known male Ghost-type Gym Leader.

Morty is a tall young man with golden-yellow hair and dark peridot eyes.

Morty wears a light blue bandanna on his forehead. His attire consists of a long sleeved shirt the same color as his bandanna with yellow elbows, jeans and sneakers.

Morty wears a purple bandana. He has a purple scarf with red ends and a round-like symbol. Morty also has a long-sleeved striped black shirt, a pair of purple double bracelets around his arms, some white jeans and a pair of black and purple sneakers with red soles.

Morty, first appeared in the Generation II games as the Ecruteak City Gym Leader, specializing in Ghost Pokémon. His Gym holds a large, pitch black, pit where the player must navigate their way on a small invisible walkway in order to reach him. Upon defeating Morty, he will reward the player with TM30 (Shadow Ball), and the Fog Badge. 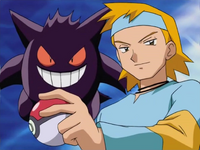 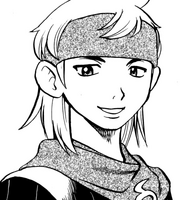 Retrieved from "https://pokemon.fandom.com/wiki/Morty?oldid=1421915"
Community content is available under CC-BY-SA unless otherwise noted.