Morrison is one of Ash's friends. He was defeated in the Hoenn Tournament by Ash.

Morrison dropped a rice ball when Ash caught it. Morrison went to get it, but bashed into a tree, and just as he was to take the rice ball, May's Munchlax ate it. Ignoring that, Morrison introduced himself to them, as well as Max and Brock. Morrison explained he was a participant for the Hoenn League, which sparked Ash's interest. As Morrison and Ash expressed their desires to become Pokémon Masters, they started to argue with one another. Morrison battled with his Beldum against Pikachu. Despite knowing only one move, Beldum and Pikachu knocked each other simultaneously, ending the battle in a draw. Morrison continued to argue, showing he had seven badges, but Brock reminded him the League would start in two months. Ash showed that he had all the badges, causing Morrison to dash away.

The heroes met him again at the Pokémon Center, where he wanted to have Beldum recover, since the island did not have a Gym. Ash wanted to do the same with Pikachu, and the two ran off, to compete against each other. The two then competed against each other in eating and enduring hot bath water, until they got scalded. Ash and Morrison were worn out, but after receiving back Beldum and Pikachu, they gave the rest of their Pokémon for recovery. As the night approached, Morrison went outside to get some sleep. May thought that to be dangerous, but Morrison added that his Beldum watched over him. Ash went to do the same, and as he was climbing the tree, he fell down, only to be caught by Beldum. Ash tied a hammock to sleep in, and the two sides noted that the other one was stubborn. Still, they were inspired by the surroundings: the night sky, the trees and Pokémon. The next day, the two boys went to train, but continued to argue about the same spot they chose.

As they failed to arm wrestle, they raced to choose the training spot. After they tripped over, they became hungry, and ran to grab an apple from a tree. Since they both got to the apple at the same time, the boys split it. In that moment, their Beldum and Pikachu got captured, while Ash and Morrison were trapped in a cage by Team Rocket. The latter flew off in a balloon, while Ash and Morrison tackled the cage, eventually breaking it. The two then charged over a cliff to get to the top of Team Rocket's balloon, and pierced it to inflate it. Despite having no Pokémon, Ash and Morrison endured Seviper and Cacnea's attacks. They eventually pushed Seviper and Cacnea to the cage, freeing Pikachu and Beldum, who quickly blasted them off. Morrison and Ash thanked each other for rescuing the Pokémon. Morrison then took a ship to obtain his last badge, bidding farewell to the heroes, promising to meet Ash at the League.[1]

Arriving at the Hoenn League, Morrison again dropped his sandwich, which fell in a pond. Ash, who was training, had his Glalie use Ice Beam, which accidentally hit Morrison. After being unfrozen, Morrison met Ash and others. He again competed with Ash in a short race until they fell in a hole made by Team Rocket. However, Tyson and Meowth appeared, blasting the enemy away and helping Ash and Morrison come out. Brock reminded Morrison about the registrations, who dashed away, managing to enlist before the deadline. Tyson walked away, wishing them luck in the preliminaries, a word which Morrison didn't understand. The next day, Morrison battled in the first round, where his Beldum battled an Electabuzz. Despite Beldum getting quite hurt, it evolved into a Metang and quickly defeated it. Morrison won the battle, and the heroes congratulated him.[2]

Morrison battled in the next round, in a Double Battle using Growlithe and Gligar against a Trainer's Machamp and Marowak. While Growlithe had trouble battling Marowak, who used its club to deflect Flamethrower, Gligar flew around Machamp and managed to defeat it with Guillotine, after taking a Dynamic Punch. Marowak managed to defeat Growlithe, and faced Gligar. Despite Gligar getting struck with Ice Beam and Bone Club attacks, it was able to defeat Marowak with Iron Tail. After Ash won his round, he argued with Morrison who had a tougher battle, before the two were notified by Max that Tyson won his round as well.[3] The next day, Morrison won his next round, and continued to argue with Ash. They went to Tyson, who was attacked by Team Rocket, and helped him defeat them to rescue his Sceptile. Since the next round would be in two days, Ash and Morrison then trained alongside each other the next day.[4]

Morrison watched Ash's battle against Katie. Afer the former's victory, Morrison battled in the next round and defeated a Trainer's Machamp. The group had dinner together, when they learned the next matchups: Ash would face Morrison in the next round. Morrison became upset, ignoring Ash and storming out, sending a Metang to train. However, thinking of Ash, he ran off. The next day, the two Trainers faced each other on the battlefield, where they sent a Girafarig and a Corphish on an icy ground. However, Morrison was still upset as his Girafarig's performance staggered: Corphish easily defeated it. Morrison wondered what to do next, as the judge reminded him to send another Pokémon or lose the match.[5]

Morrison was still unsure, to which the judge went to disqualify him. Ash, however, stopped him, and asked of Morrison to snap out of his state, to which he sent Growlithe. Growlithe evaded Corphish's Bubble Beam, but was defeated by its Crabhammer. Ash yelled at Morrison to try better, which forced Morrison to battle Ash with a much stronger spirit: he sent Swampert, who collided with Corphish's Crabhammer with Focus Punch, eventually causing both Pokémon to faint. A break was made for the match, to which Morrison was visited by Ash and his friends. Morrison apologized to Ash for not being determined, and was much more inspired to win, even if it meant to battle his friend.

On the grassy field, Ash sent Pikachu to face Steelix. Steelix executed Dragon Breath and Dig, which Pikachu could not avoid. After clashing with each other using Iron Tail, Pikachu fainted, forcing Ash to send Torkoal. Torkoal landed a hit with Overheat, and protected itself from Dragon Breath with Iron Tail. However, Steelix managed to land a hit with Dig and defeat it with Dragon Breath. Ash sent Grovyle out, who avoided Steelix's attacks and defeated it with Leaf Blade. Morrison sent a Gligar, who attempted to use Steel Wing. Grovyle took the opportunity to get on Gligar's back to use Leaf Blade, but Gligar tossed Grovyle to the ground and defeated it with Guillotine. Ash sent Swellow, who had an aerial battle with Gligar, using Double Team to avoid its Guillotine, before getting struck with Hidden Power. The two sides used Aerial Ace and Steel Wing before both Pokémon fainted.

Ash and Morrison sent Glalie and Metang as their final Pokémon. Glalie endured Metang's Take Down and Confusion attacks, before using Icy Wind to freeze Metang. Metang went to use Meteor Mash to inflict heavy damage to Glalie, who spinned around using Headbutt to evade such an attack and defeat Metang. At evening, Morrison yelled out for his defeat, but nevertheless thanked Ash for a great battle. As dinner was served, the two boys raced to the restaurant, where they found out Ash would face Tyson in the next round. Ash spent another night among the trees on a hammock, as Morrison slept by him. Morrison had doubts as Tyson could defeat Ash, but Ash assured him he was able to defeat his rival. The next day, Morrison sat with Brock, May and Max, watching Ash's match with Tyson.[6]

Morrison cheered for Ash against Tyson. During the break, Morrison encouraged Ash to win, reminding he could not afford to lose, to which Ash agreed. At the end of the battle, Ash lost, but Tyson thanked him for the great battle. This moved Morrison, seeing nobody cared about winners or losers, as they had a great time in the end. At the end of the Hoenn League, Morrison swore to battle Ash in the future, who wanted to prepare himself for future tournaments.[7] In the end, Morrison departed away with Tyson and Meowth, bidding farewell to the heroes as they returned to their hometowns.[8] 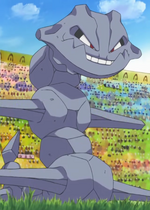