Morpeko is a small, chubby, bipedal rodent Pokémon. While in Full Belly Mode, its body is light yellow with two large markings on its body. The left side is black and the right side is brown. Its eyes are black with white pupils and it has pink spots on its cheeks. It has a small dot for a nose and its mouth has one tooth in it. It has two small ears with one tuft under each one, and its limbs are short.

Hangry Mode Morpeko is dark purple and both of its markings are black. Its eyes are red and it has an angry expression, as opposed to Full Belly Mode.

Although generally amiable and approachable, Morpeko is always hungry, as its cheeks are constantly generating energy. To avoid getting too hungry, it always stores Berry seeds as snacks, which it uses to generate its electricity.

When starved for too long, Morpeko becomes more aggressive in its Hangry Mode and won't cease being fierce and cruel until its hunger is being satisfied.

When in Hangry Mode, its electricity will become dark powers due to its hormones.

Team Rocket had a wild Morpeko living with them until James decided to be the one to catch it.

Morpeko's appearance and wheel-based signature move indicate that it may be based on a hamster or a guinea pig. Alternately, its temperamental hunger and its small nature may draw inspiration from the shrew. It may also be based on a marsupial, as it is shown to stuff food or its hands inside of the yellow/purple pouch on its body. Its dual nature with a trigger maybe a reference to Dr. Jekyll and Mr. Hyde. Its different colors (brown, yellow, and black) may be found on the incomplete dominant coloring often found with guinea pig fur. It may get its Dark typing from the fact that hamsters are often very aggressive and territorial animals.

Morpeko may be a combination of "morph" and 腹ペコ harapeko, which is Japanese for "hungry" or "starving". It may also come from marmot, the Japanese name for the guinea pig. It could also possibly come from pika, as it is the electric-rodent Pokémon of the region, which originates from the concept of Pikachu.

Its form uses the term "hangry", an expression used to signify hunger and anger, or more accurately, "shrewish", in one. 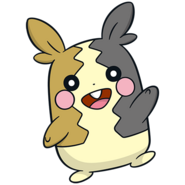 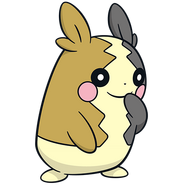 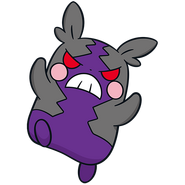 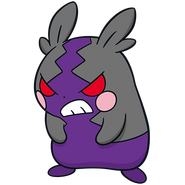 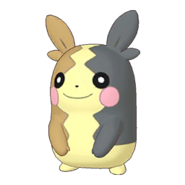 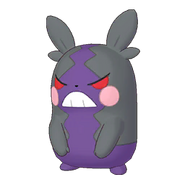 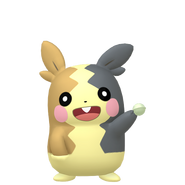 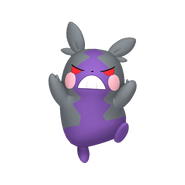