Morgrem (ギモー, Gimoo) is a dark/fairy-type introduced in Generation VIII.

Morgrem is a purple bipedal Pokémon, whose lower half is green. It has long purple hair which covers its left eye. Morgrem also has a long nose and long ears.

Morgrem are conniving and heinous. They sometimes find it amusing to cause people who are lured by them into forests during midnight to get lost forever. At times, they pretend to apologize through kneeling, before abruptly shooting its spear-like hair from their scalps to attack their fooled foes.

Morgrem can shoot their hair to stab their unaware opponents.

Some people believe that they can help crops to grow faster.

Morgrem evolves from Impidimp at level 32 and evolves into Grimmsnarl at level 42.

Morgrem is based on a goblin or gremlin. It may also be based on one of the creatures from Morgan La Fay, a witch that summoned a green knight who falsely bowed to King Arthur, which is also stated in Morgrem's Pokémon Sword Pokédex entry. It may also take inspiration from the Redcap, a goblin from English folklore who is said to have long hair, skinny fingers, and stabs people with a pike staff, similarly to Morgrem and how they attack with their sharp hair. The style of its hair may also take inspiration from goths or emos.

Morgrem may come from the words "morbid", "gremlin", and "grem", an old word meaning to anger. It may also come from "Morgan La Fay", a famous witch that summoned creatures, including a green knight who falsely bowed to King Arthur. 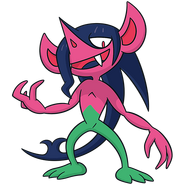 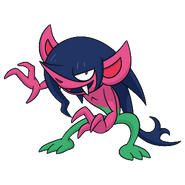 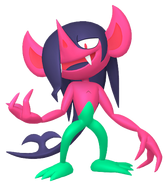