Morelull is a small, white Pokémon similar to a mushroom. It is one of the shortest Grass-type Pokémon. It has large, black eyes with pale green half-circle markings on the outer sides. Small bumps ring the top of its head, similar to hair. Its head is much larger than its thin, stem-like body. At the base, the stem splits into three green roots that act as feet. Three large mushrooms sprout from the center of its head. Each mushroom has a thin white stem and a darker ring of color around the base of the cap. The center and largest mushroom is light pink, while the other two mushrooms are smaller and a light purplish-blue. At night, Morelull can make the spores filling its mushroom caps glow.

Morelull use their tiny feet to communicate with their kind, while sometimes when they face danger they will spread spores. However, it is rumored that Morelull also use their spores for good and can sense crisis, as a rumor goes that Morelull had saved a plane from crashing using their spores.

Morelull are often known to travel in groups and often run around forests. Morelull are also known to sap energy from sleeping people or Pokémon, which they then use the energy to feed other plants.

They scatter spores that burst into bright, glittering sparks. The pulsing light of the spores can induce drowsiness.

Morelull can be found in Glimwood Tangle (only in the show)

Morelull is based on bioluminescent mushrooms. Its Fairy-typing may come from "Fairy Rings", rings of mushrooms often found in open grassy areas, or the Coprinellus disseminatus (also known as a Fairy Cap Mushroom).

Morelull may be a combination of morel (a type of edible fungus), Morhcella (a genus of fungus), and lull (to make someone or something go to sleep). Most of the letters from its name can also be found in the name Coprinellus disseminatus (the mushroom Morelull is most likely based on). 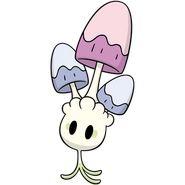