The Party Crasher and Guzma the Destroyer

26 chapters as an Alolan Grimer

This Alolan Muk is a poison/dark-type Pokémon owned by Moon.

Grimer was caught by Moon so she could understand its poison and its properties. She wanted to use its poison to make medicine and have a good understanding of it. Because of this, Moon developed a love for Poison-types. Grimer was used in the Full Force Festival in a match against Gladion. During the first match, Grimer was up against Gladion's Porygon. Moon mentioned during the battle that she especially likes Alolan Grimer due to its cute colors, to which the others look at her in shock.[1]

During Moon's time in Ultra Deep Sea, Grimer was revealed to have evolved into Muk.[2] 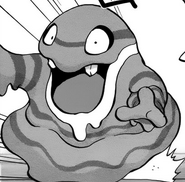 As Alolan Grimer
Add a photo to this gallery

Retrieved from "https://pokemon.fandom.com/wiki/Moon%27s_Muk?oldid=1164199"
Community content is available under CC-BY-SA unless otherwise noted.