This Decidueye is a Grass/Ghost-type Pokémon owned by Moon. It was formerly a Flying-type.

Professor Kukui had a battle with Popplio and Rowlet. He complimented their moves until he greeted Sun, who arrived with Moon to his lab.[1] Rowlet and Kukui were enclosed in Popplio's water bubble, but Moon freed Kukui first. Later, after staying in the water bubble for too long, Rowlet caught a cold and began to sneeze. Moon, using her medicine and pharmaceutical skills, was able to cure Rowlet. She asked about Rowlet, to which Professor Kukui replied that Rowlet was nocturnal and was able to use its strength best during night. Moon befriended Rowlet, and Moon told Sun that both prefer nighttime over daytime. Rowlet was next seen on Moon's lap.[2]

In USUM001, Rowlet was revealed to have evolved into Dartrix. 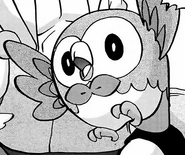 As Dartrix
Add a photo to this gallery

Retrieved from "https://pokemon.fandom.com/wiki/Moon%27s_Decidueye?oldid=1202307"
Community content is available under CC-BY-SA unless otherwise noted.