The player's Mom appears in every Pokémon RPG game to date, excluding, of course, games like Pokémon Stadium and Pokémon Snap. She assists you in the beginning on these games in small ways. In Pokémon Ruby, Sapphire, Emerald, Diamond, Pearl, Platinum, Black, White, the player's mother gives you Running Shoes before you leave the first town. In FireRed and LeafGreen, she sends the running shoes to you through one of Professor Oak's aides who gives them to the player after they've defeated Brock in Pewter City.

In all the games save for Gold and Silver, and their respective remakes, as well as Pokémon Crystal, talking to player's mother heals injured Pokémon as would a Pokémon Center. In Gold, Silver, and Crystal, as well as HeartGold and SoulSilver, the player's mother will take a percentage of your income from defeating trainers and save it. Occasionally, she will spend some of the saved up money on decorations, berries, or other items she finds. At the beginning of Ruby, Sapphire and Emerald, the player's mother draws your attention to the television downstairs, informing you that they're showing the gym of the players father, Norman. Unfortunately, by the time your character has made their way to the TV, you've missed seeing your father.

At the end of Ruby, Sapphire and Emerald, after you've defeated the Elite Four and are standing in the Hall of Fame, there will be a television report of one of two Pokémon roaming the world, either Latios (Ruby) or Latias (Sapphire). In Emerald, the news report will not distinguish between which of the two it is. When the player talk to the player's mother, she will ask you if the report was about a red creature or a blue creature, and whichever you pick, Latios being the blue creature and Latias being the red, will determine which of the two will be roaming in your world.

The mother in Diamond, Pearl and Platinum is the first game that the player's mother to have an actual name in the game, that being Johanna. She takes on a much more active lifestyle then the player's mother's from past games, often competing in contests rather than staying at home all the time. When the player meets up with Johanna, their Mother, at the Super Contest Hall in Hearthome City, she gives the player either a tuxedo or a dress depending on the players gender. She also supplies the player with a journal at the beginning of their journey.

In Black and White, Hilbert/Hilda's mother was once a Pokémon trainer herself, where she met her husband, and in turn the player's father, while he was on his own adventure. She and her husband settled down and had a child, which later becomes the player's character. At the beginning of the game, after the player selects their starting Pokémon, she gives you an Xtransceiver (or Live Caster from the direct Japanese translation) which can be used like the PokéGear phone from Pokémon Gold, Silver, Crystal, HeartGold, and SoulSilver to contact, or more specifically be contacted, by Professor Juniper, the mother, and others. When a call is made with the Xtransceiver, it acts like a video call, bringing up an image of your character and whomever your character may be calling or receiving a call from. In its sequels, the mother was a Pokémon Center receptionist, meaning she was or worked with a Nurse Joy.

In Pokémon X and Y, this is the second game that the player's mother is also named, Calem/Serena's mother name is Grace, and she was a famous Rhydon rider.

Artwork of Gold/Kris's mother from Pokémon Gold, Silver, and Crystal.

In-game sprite of Hilbert/Hilda's mother from Pokémon Black and White.

In-game sprite of Nate/Rosa's mother from Pokémon Black 2 and White 2.

Red's Mom as she appears in Pokémon Origins

Johanna, as she appears in Diamond and Pearl 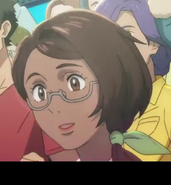 Victor Mom, as she appears in Pokémon Evolutions
Community content is available under CC-BY-SA unless otherwise noted.
Advertisement