Storage System maintenance
Elite Four (USUM)
Molayne is a character appearing in Pokémon Sun and Moon. He is a former Trial Captain and Sophocles's cousin. In Pokémon Ultra Sun and Ultra Moon, he replaces Hala as a member of the Elite Four.

Molayne is a former Trial Captain, who passed the role onto his cousin, Sophocles. Now, Molayne takes care of the Alola's Pokémon Storage System.

Molayne role is quite altered in these games, now he gives the Steelium Z to the player before Sophocles's trial and don't battle with him/her and later, he takes position as a member of Alola's Elite Four. 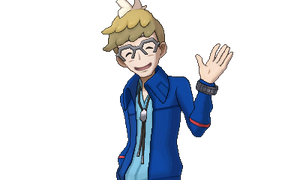 Molayne's VS sprite in Sun & Moon

Molayne's name likely comes from molybdenum, a metallic element. Mārein may come from "machine."
Retrieved from "https://pokemon.fandom.com/wiki/Molayne?oldid=1263212"
Community content is available under CC-BY-SA unless otherwise noted.