Mohn is a character appearing in Pokémon Sun and Moon. He is the owner of Poke Pelago Island, Lusamine's husband, and the father of Lillie and Gladion.

Mohn is a middle aged man with short blonde hair and a slightly portly build. He is usually seen wearing a straw hat.

When he was a professor, Mohn was a serious man dedicated to researching Ultra Wormholes. After having amnesia, however, Mohn is now a kind and friendly person who loves caring for Pokémon and without memories of his past. He loves eating patterned and rainbow Poké Beans.

It is revealed later by Gladion that he was a professor at Aether Foundation, and was the one who named Cosmog. He wrote research papers on Ultra Beasts and Ultra Wormholes. One day, he mysteriously disappeared through a wormhole, which caused his wife Lusamine to grow insane and try to desperately find him again, causing her to be so interested in Ultra Beasts and Ultra Wormholes.

After returning to Alola, he had gotten amnesia and develops an island into Poké Pelago. He has stayed away from his family ever since, for his memories are lost.

Mohn plays the same role like he did in Sun and Moon. However, the player character can come across him after defeating Gladion in the League Title Defense. He can be seen discussing with Lusamine about the cooperation between Aether Foundation and Poké Pelago. Although Lusamine recognizes him, he fails to do so owing to his severe amnesia. Lusamine decides to bid him farewell after accepting that he has found his own happiness and it would be better for him to forget his past. 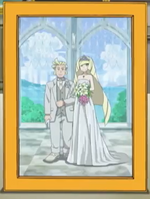