Misty is the Gym Leader of the Cerulean City Gym and specializes in Water-type Pokémon. She gives the Cascade Badge to trainers that defeat her.

Misty is a slender girl with a fit build and spiky hair. Unlike most other characters, her appearance has a tendency to fluctuate.

Misty has blonde hair and light skin. She wears a strapless two-piece blue swimsuit that leaves her arms, legs, and belly bare. A pair of sandals completes the outfit.

Misty appears to be older and taller. Her hair is now honey-orange instead of blonde and she styles it differently. Clothing-wise, she wears a blue and white one-piece swimsuit and a white jacket, leaving only her legs bare.

Misty resembles her anime counterpart. She has orange hair held in a spiky ponytail and is garbed in a new outfit that is similar to what her anime counterpart wears. She wears a white and blue shirt, blue denim shorts, and red, blue, and white sneakers. Underneath her clothes, she wears a red bikini top with a blue gem in the middle and matching red bikini bottoms that resemble boyshorts.

Personality-wise, Misty is said to be a tomboy. She is competitive and brave, and also says things that are either on her mind or what she first thinks of.

In Red, Green, Blue, and Yellow, as the Cerulean City Gym Leader. She is given the nickname "The Tomboyish Mermaid" and uses Water-type Pokémon. When defeated she will give the player a Cascade Badge along with TM03 (Water Pulse)

In Gold and Silver, she still appears as the Cerulean City Gym Leader, though her depiction seems older compared to her previous depiction.

From information gained from a variety of games, it is known that Misty is always looking for a way to improve her techniques. When she trains, she goes to the Seafoam Islands for herself, and her Pokémon. Misty also has high hopes for Cerulean's North Cape, which is known as a romantic date spot. She also dreams of travelling when she becomes a better Pokemon Trainer.

Misty also appears on Pokémon Channel on a full Japanese Pichu Bros. Disk. It differs from the other Japanese Disk as Misty's (Kasumi's) voice actress is the narrator.

Misty has been in several Pokémon manga through the years. She has ranged from being a main character to being one of the minor characters depending on the storyline. She shares some similar experiences with her anime version in "The Electric Tale of Pikachu". Her bike is also destroyed by Pikachu's Thundershock, and she occasionally tags along with Ash in his travels, though it is not as constant as it is in the anime. There are some differences though, including her outfit, and age (12), while she is 10 in the animated series and the fact that she is not always travelling with Ash. Eventually Ash and Misty battle in the Cerulean City Gym, it is not really a battle though, as the goal is for Ash to retrieve his stolen hat from Misty. Even after this she still follows Ash, in claims that she wants him to pay her back for the bike. It is claimed that Misty has a thing for younger men, Ash, by her sisters after their Gym Battle when Misty is overly harsh with Ash after winning.

Misty's VS sprite in Red & Blue

Misty's VS sprite in Yellow

Misty's VS sprite in FireRed & LeafGreen 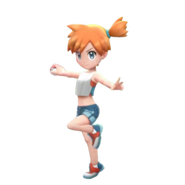 Misty in FireRed and LeafGreen

Misty in Pokémon HeartGold and SoulSilver

Misty, as she appears in the GB games.

Concept art of Misty for Let's Go Pikachu/Eevee
Add a photo to this gallery
Retrieved from "https://pokemon.fandom.com/wiki/Misty_(game)?oldid=1288504"
Community content is available under CC-BY-SA unless otherwise noted.