For the variant appearing in the games, see Mira.

Mira in other languages

Mira is a character appearing in Pokémon Adventures.

Mira is a short little girl with fair skin, pale orange eyes, and long burgundy hair that's held up in a side ponytail on the left and a loop on the right with golden bell-shaped hair clips. She wears a white shirt with poofy sleeves, a burgundy collar-like tie and matching shorts, white tights, and burgundy shoes with poofy cuffs.

Mira is a determined trainer. She is also concerned about her friends, and can be very emotional if something happened to them.

At the Survival Area, Buck, Marley, Cheryl and Mira had their Claydol, Arcanine, Blissey and Alakazam battle each other. Alakazam used Psychic, Arcanine used Flare Blitz, Blissey used Hyper Beam and Claydol used Psychic against each other.[1]

Cheryl attended Looker and Buck, who were resting in the infirmary. Mira cried that the two got injured, but Cheryl stated they had to let them rest, and Marley confirmed the former's words, as she was holding onto Professor Oak's letter.[2] Mira and Cheryl visited the Battle Tower. They wanted to accompany Palmer, to get revenge on Buck, who got hurt in the battle against Team Galactic. Palmer permitted them, and went with them and Riley to Platinum. With everyone ready, the group went on Cresselia, while Riley took the lead.[3]

The two went with Riley on a boat, as he sailed away, and had Lucario and Riolu navigate the direction.[4] The machine took them to the Spring Path, which led them to the Sendoff Spring. Riolu eventually sensed something coming from the Turnback Cave. Much to their shock, the group saw Marley being captured by the Team Galactic grunt. However, the latter released her, and explained he defecated from Team Galactic, and felt that Marley was a hitman trying to take him out. Thus, he promised to take the group to the portal to the Distortion World.[5]

While the group was walking, Mira and Cheryl asked Marley why was she here, to which Marley explained she was investigating Professor Oak's letter, and found Shaymin. The former Team Galactic grunt took them to the portal. Mira, Cheryl and Marley crossed through, and got separated from others. Suddenly, they heard a voice: Charon, who spoke about healing his Heatran, to which the girls realized that he had attacked Buck. As Charon visited the Team Galactic commanders, he let them confront Cheryl, Mira and Marley.[6] Mira confronted Saturn, and had Alakazam resort to defense. Saturn claimed she wasn't using her Psychic-type advantage over his Toxicroak, who used Poison Jab. Mira, however, announced that she was simply stalling them.[7] Their battle got interrupted by Giratina, who passed them by.[8] Without further ado, Mira and Alakazam went back to Palmer and the rest, and were annoyed that Giratina interrupted their battle. They remained behind to watch the Legendary Pokémon battle each other.[9]

Mira, Cheryl, and Marley emerged from the Distortion World, through the portal at Sunyshore City, and were glad to have reunited with Buck, who had recovered.[10] 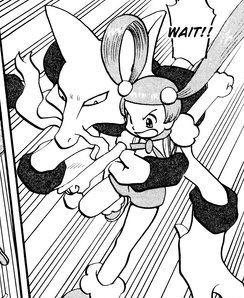