The "body" of Mimikyu has been designed to look like Pikachu. The overall structure of the disguise does resemble Pikachu, but the skin is a grayish-beige color instead of yellow. Its "tail" is made of wood and has a grayish-brown color. The disguise's "face" only consists of poorly drawn eyes, cheeks, and a zigzag mouth. Two holes appear in the body of the costume, which are the actual eyes of Mimikyu.

Underneath the cloth appears to be a black shadowy mass with two glowing eyes, but it is unknown what it looks like in full, as glimpsing it causes immediate catatonic shock, if not death. In actuality, Mimikyu is only approximately the size of its disguise's torso, as there appears to be nothing organic inside of the rag's head.

Apparently, about 20 years ago, it was said that Pikachu is more popular than them, so they dressed up like Pikachu in order to become more popular among Trainers.

In the case of one notable Mimikyu in the anime, it has been shown to harbor an immense, almost psychopathic hatred toward all Pikachu, especially Ash's. This may not be the case for all Mimikyu however, and it is likely that different Mimikyu have different attitudes toward Pikachu.

Mimikyu is said to be a cursed being, and those who have seen under their rags have all died painfully out of shock. In one instance in the anime, Meowth saw Jessie's Mimikyu's true form after it removed its rag underwater, which caused his soul to leave his body temporarily, leaving him in a catatonic state. He survived because he only glimpsed Mimikyu's true form through the water, rather than directly.

However, most Mimikyu mean no actual harm, and in fact only want to make friends with humans. As such, they hides their true forms under a costume representing what people loved the most; Pikachu, though when attacked, they will show one or both of their claws that hide underneath the cloth they wear and strike back.

Mimikyu is based on a badly-made Pikachu doll. It may also be based on ghost costumes made from a white sheet with eye-holes. Its true form is based on legends about darkness clouds that make people vanish or die. It may also draw inspiration from Lovecraftian beings, creatures created by author H.P. Lovecraft that are said to kill or cause mental insanity simply by their appearance alone. It could also be based on the Bugul Noz, a kind and gentle fairy that was lonely due to its ugly appearance. 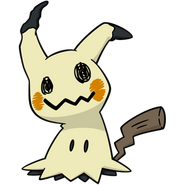 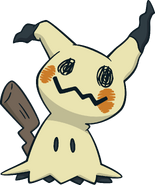 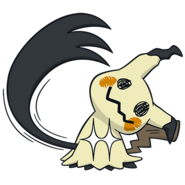 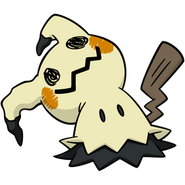 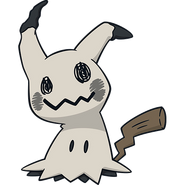 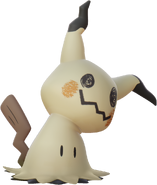 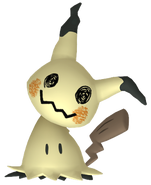 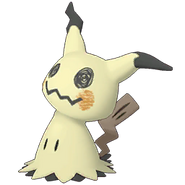 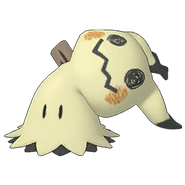 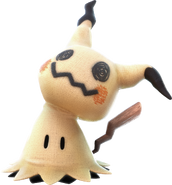 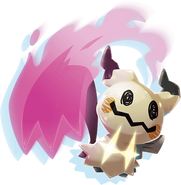 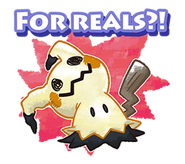 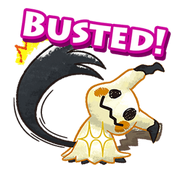 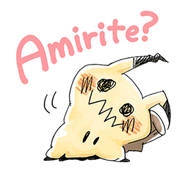