Milo is a character that was introduced in Generation VIII. He is a Gym Leader in the Galar region that specializes in Grass-type Pokémon.

Milo is a huge, muscular young man. He has peach-colored hair, green eyes, and fair skin with some slight freckles. He wears a beige sun hat with a green brim, a white t-shirt with some multicolored triangles and the Gym Challenge and Grass-type symbols on it, green and black shorts, and matching black and green boots with a bush design. (He also wears a matching green and black glove and a Dynamax band.) To carry his Poké Balls, he has a black contraption that he sets on his hip.

Easy going and humble, Milo is kind and has a big heart. He is also a hard worker and likes to encourage people, and his main principle is to "simply enjoy battling and have fun." However, when actually participating in battles, he demonstrates high fearlessness and persistence with his Grass-type Pokémon.

Before the events of the games, Milo was born in Turffield to a farmer couple. He also has a little brother that he does farmwork with (according to his concept art), although the player character never meets him.

Milo Dynamaxing his Eldegoss in the first gym. 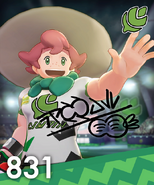 Milo's rare League Card.
Add a photo to this gallery

Retrieved from "https://pokemon.fandom.com/wiki/Milo?oldid=1296969"
Community content is available under CC-BY-SA unless otherwise noted.