Milcery is a small, white Pokémon made of cream. It is simplistic in appearance, with stubby arms and white eyes with no visible pupils. Drops of liquid are seen splashing from its head.

It is said to be born from sweet smelling particles in the air. Patisseries it visits are guaranteed to be successful and make a lot of money.

Milcery evolves into Alcremie when holding a Sweet while its trainer spins around and poses. Depending on the timing of the day (Day, Night, 7-7:59 in game time), the direction the player spins, and the duration of the spin, the resultant Alcremie would have a different form.

Milcery is based on cream or milk. It may have been inspired by the tradition of leaving milk outside to appease certain fairies. Milcery being entirely female may refer to the fact that milk is typically only produced by female mammals.

Milcery may come from the words "milk", "sorcery", and "creamery". It may also come from "mercury", an element that is often liquid in substance and moves similarly to Milcery. It is also known to mix with other elements (seen with Meltan, another Pokémon based on Mercury), similar to how Milcery mixes with whatever ingredients it holds. This is further seen in its Shiny coloration, where it is more white and gray.

Its Japanese name, Mahomiru, comes from maho (magic) and "milk". 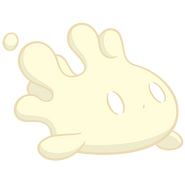 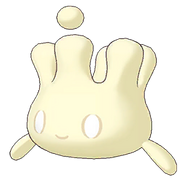