Mikey is a character appearing in Pokémon the Series: The Beginning.

He has three brothers, Sparky, Rainer and Pyro, who were pushing him to evolve his only Pokémon, Eevee. Each brother specialized in one of Eevee's evolutions and would argue which evolution was best. Due to their pressure, Mikey ran off and tied Eevee up until after they could talk to him about evolving Eevee. After talking to Misty at an evolution party being hosted by Mikey's brothers, Mikey began to gain confidence, but Team Rocket appeared and stole several stones and Pokémon from the party, including Eevee.

After following the trail left by Misty's Horsea to where Team Rocket had stopped to eat the food they took from the party as well, Mikey was unable to do anything as Jessie held Eevee hostage, watching as his brothers tried to rescue Eevee, but despite some initial success, were beaten back. Luckily, Misty's Horsea is able to knock Jessie over with its Sludge attack, and in the process, she throws Eevee's cage into the air, allowing Mikey to rescue his Pokémon, before Ash has Pikachu give Team Rocket a good electrocution in retaliation. However, despite getting zapped, Team Rocket refused to surrender and stood their ground, while Mikey's brothers' Eeveeloutions were unable to battle from taking too much damage.

Seeing his brothers were in trouble, Mikey commanded Eevee to battle Team Rocket and won, causing them to be blasted off by Eevee's attack. The brothers commented that Mikey's Eevee was strong without evolving and stated that they were now truly the "Four Eevee Brothers". The brothers, the party guests, and Ash and company then took a picture to commemorate the occasion. 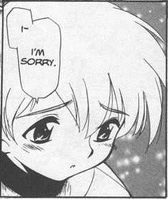 Mikey in The Electric Tale of Pikachu (manga)