Meyer is a character appearing in Pokémon the Series: XY and XYZ, who is the father of Clemont and Bonnie's and one of the best engineers in Lumiose City. He has a secret identity, known as Blaziken Mask.

Meyer, being an engineer, resembles a mechanic wearing a cap, dark gray long-sleeved shirt with the sleeves rolled up, light gray overalls and brown shoes. He has brown eyes, brown hair and a beard.

As Blaziken Mask, he wears a black body suit and gloves with red and light gray stripes. He also has red boots and kneecaps as well as a cape of the same color. As his name implies, he wears a Blaziken mask to conceal his identity. He also wears a red belt with pouches with a gold-outlined gray buckle resembling a crown, containing his Key Stone.

Meyer is a technician, who loves helping other people. This comes to helping people in danger or actively fight against crime, so much that he becomes a superhero and Mega Evolves his Blaziken. Meyer also loves his children and is glad when Clemont and Bonnie grow and become stronger with their friends. However, he also wishes them to come home someday, for he slightly misses them sometimes.

When Clemont was a kid, Meyer recognized his son as an electric-type prodigy. Thus, he sent him to an academy, hoping Clemont would make some new friends there.[1]

Meyer, as Blaziken Mask, used his Mega Blaziken saved Ash and his Pikachu from falling off from Prism Tower after Garchomp was freed from Team Rocket's device. Soon after, Meyer and Mega Blaziken fled.[2]

When the heroes came back to Lumiose City, Meyer met his and Bonnie's friends. He was touched the two made some new friends. He asked him to come back sometime, though noted being a Gym Leader was a great pride to the city, Clemont shouldn't be too restrictive on his challengers. Just as Meyer drove away with his Ampharos, Ash and Serena realized Clemont was the Gym Leader. Later on, Clemont and Bonnie returned to Meyer and claimed they wanted to continue the journey with Serena and Ash, as they shaped them both, regardless of how happy, scary or sad they were. Meyer was touched by the moment and let his children continue the journey with their friends.[3]

Meyer was driving near Lumiose City and saw how Ash and Clemont were running. They both told Meyer there was an dangerous incident. Later on, the Blaziken Mask had his Mega Blaziken help the heroes to defeat Team Rocket's mecha. Mega Blaziken returned to the Blaziken Mask, who was Meyer. Meyer noted Clemont and Bonnie would learn much by travelling with Ash and Serena.[4]

Hearing Clembot got arrested, Meyer met up the heroes and wondered what was the problem. Officer Jenny explained Clembot was supposedly involved in certain thefts, while Alexa noted the Blaziken Mask was also investigating the case. Meyer was nervous and claimed he never heard of that guy. During the night, Meyer disguised himself once more and faced Team Rocket, who tried to steal Clembot and Dark Clembot. He had Mega Blaziken attack their balloon, freeing the bots, while Clemont faced Belmondo, who was behind the theft. Before departing, the Blaziken Mask claimed Ash and Clemont will have their Gym Battle soon. Alexa tried to follow him, but lost his tracks. The following day, Meyer ate with the heroes and read Clembot was the celebrity of the city, due to the previous day's events.[5]

Meyer went to Lumiose City's Gym, where he watched his son battle Ash. He thought the Gym Battle started all the way when Clemont and Ash first battled. In the end, despite Clemont's loss, Meyer was still glad his son gave his best, which made the Gym Battle a great match.[6]

Meyer visited his children and their friends. He had Clembot go to a store, where Clembot waited two hours to buy a lot of desserts, which were meant for the children. Meyer was glad everyone was enjoying the desserts and even encouraged Ash's Pokémon to eat more, to prepare for the final battle of the Kalos League.[8] Meyer was working with Clembot, who heard the battle raging from the Kalos League stadium. Both commented how the battle was intense and wished they had time to watch the battle. Just as Lysandre took control of Z-2, roots spouted out in Lumiose City, which shocked Meyer and Clembot.[9]

Meyer disguised himself as Blaziken Mask and saved Serena, Clemont, Bonnie and Clembot from an attacking root. He asked of them to retreat, as he would take care of the problem. However, Bonnie wanted to protect Squishy, while Clemont wanted to retake his Gym back. Though initially refusing, the Blaziken Mask let them come with him, but warned if the danger was too great, they should retreat. After arriving to the entrance of the tower, the Blaziken Mask had Mega Blaziken destroy the roots to reveal the entrance. However, Aliana and Bryony arrived and stopped him. A moment later, they watched as Squishy absorbed Zygarde cells to face against Z-2.[10] The Blaziken Mask battled against Aliana and Bryony. Once Clemont defeated them, the Blaziken Mask saved Bonnie from the attack of the plants. He wanted to know why Bonnie ran off like that, but Bonnie was concerned over Squishy, whom Team Flare took control of.[11] The Blaziken Mask tried to stop Bonnie, who tried to save Squishy. She ran off, though the Blaziken Mask tried to protect her. Since Squishy didn't listen, it went to attack Bonnie, so Blaziken Mask took the hit. However, he returned and continued protecting Bonnie, who chanted a song to Squishy and successfully calmed it down.[12]

The Blaziken Mask was glad Bonnie managed to calm down Squishy and its friend, rallying them both to the cause. They both boarded on the helicopter, where it was said the megalith, once connected with the sundial from Anistar City, would destroy the world. Thus, the Blaziken Mask joined the fight against the megalith.[13] The Blaziken Mask charged with others to attack the megalith's plants. He had Mega Blaziken fire Flamethrower, which let Ash and Alain continue onwards. Once Chespie was rescued, Meyer had his Mega Blaziken launch an attack, which fused with others' attacks to destroy the megalith, but failed. Just as the megalith fired an attack, despite Valerie's Spritzee's Light Screen, the Blaziken Mask took some damage. His mask fell off and Clemont and Bonnie were shocked to see that Blaziken Mask was actually their father all this time. Meyer stated he was not hurt and asked his children if they were okay, which they confirmed. Meyer continued watching the events, as Squishy and Z-2 changed form and defeated the megalith and Lysandre.[14]

Some time later, Meyer was repairing the Gym, despite still having injuries. He was confident the Gym would be reopened the next day. Eventually, he was called by Professor Sycamore and told the heroes that Alain was coming. The next day, Meyer activated the lights at the Gym during the evening, which fascinated a lot of people that attended the opening ceremony.[15] Grace also came to Meyer's house, where she saw Serena preparing lunch. Meyer admitted he was jealous Grace has such a wonderful daughter, since she took care of Clemont and Bonnie. He also noted it was Serena's idea of the performance at the fountain, which surprised Grace.[16]

Ash remembered Meyer and his Blaziken fighting the megalith with the rest when he was reflecting back on his journey.[17] 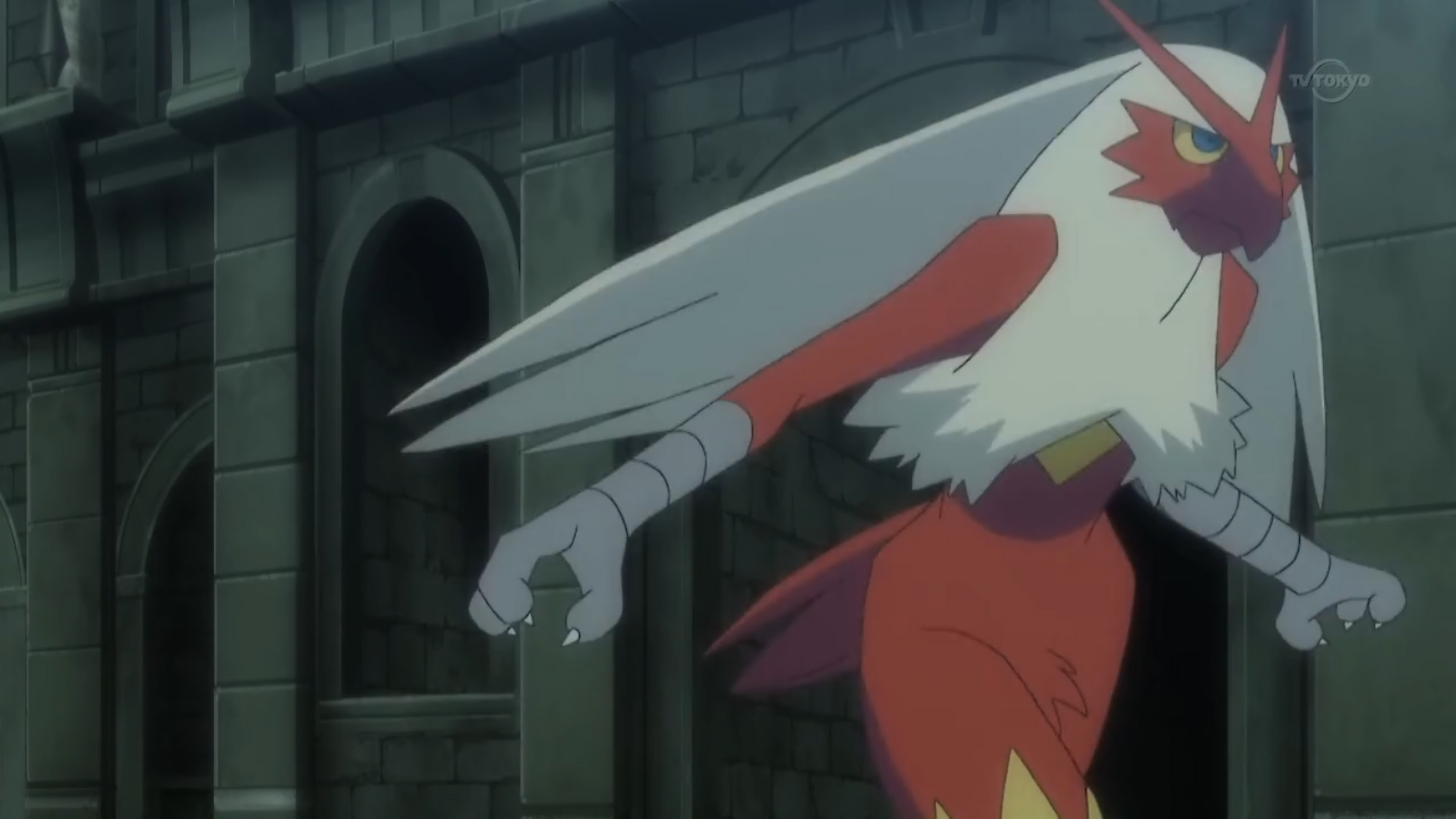 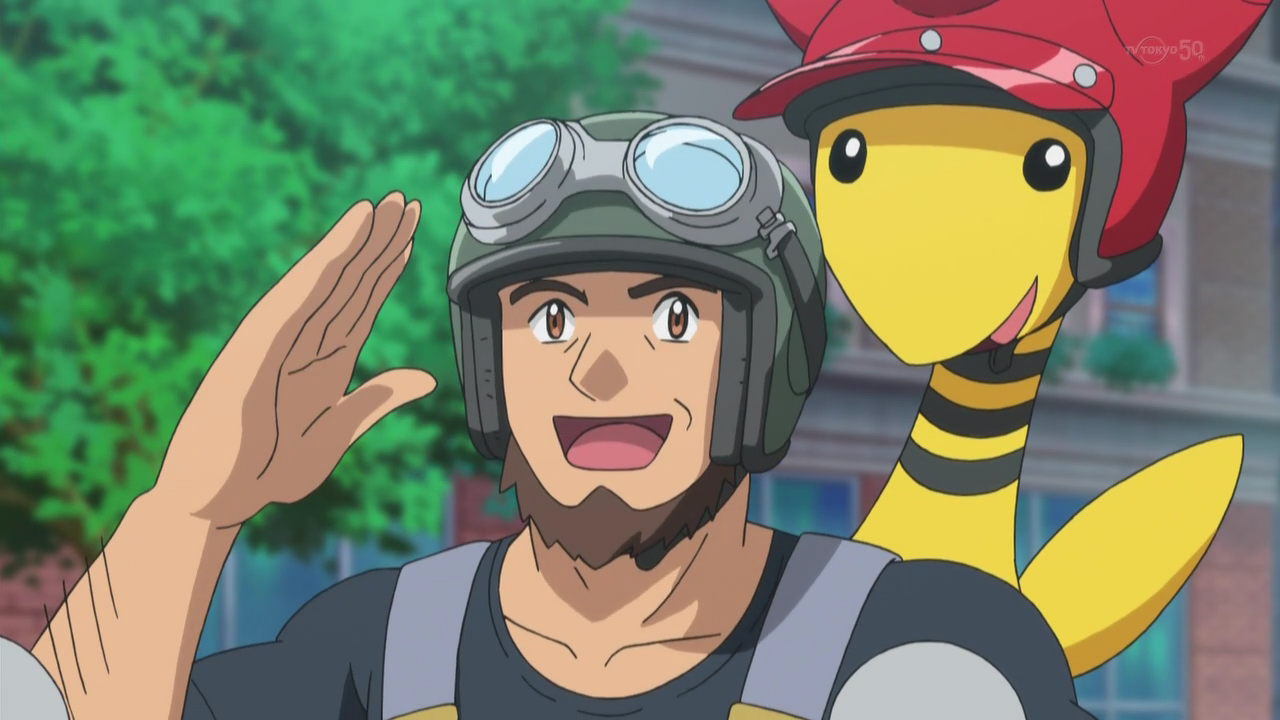 Meyer with his son, daughter and Ampharos.

Retrieved from "https://pokemon.fandom.com/wiki/Meyer?oldid=1423141"
Community content is available under CC-BY-SA unless otherwise noted.