Name
エムリット
(Emuritto)
Notes
Depending on the context, "の" may be the possessive, unless it is used in the name of a character, Pokémon, or fossil.

This Mesprit is a wild psychic-type Pokémon who appeared many times during the anime.

Mesprit was the first of the lake guardians to appear in the anime. It chose to connect with Dawn because of her ability to sense the feelings of Pokémon. Dawn first encountered Mesprit at Lake Verity in Following A Maiden's Voyage!. After she had made friends with a stubborn Piplup, she crossed Lake Verity and saw the projected soul of Mesprit. It wouldn't be until The Needs of the Three! that Dawn would see Mesprit in its true form. Mesprit contacted Dawn in her dreams warning her of the destruction of the world. Mesprit was awakened from its sleep after Azelf was captured by J. It and Uxie teleported to Lake Valor in order to try to save Azelf, but the two of them were also captured by J. Before being turned to stone, Mesprit and Uxie used Future Sight. When J was about to leave, the attack came from the clouds and struck her ship, sending it crashing into Lake Valor. Mesprit was able to contact Dawn through her thoughts. She was also able to feel its pain. Mesprit eventually teleported Dawn to the headquarters of Team Galactic. Cyrus was able to take control of Mesprit's mind with a piece of the Red Chain which he implanted in its forehead. He took it and the other lake guardians to the Spear Pillar where they were all used to awaken Dialga and Palkia. Dawn was able to successfully set Mesprit free by telling Piplup to use Bubble Beam to break the Red Chain piece that was controlling it. With their hearts bonded, Mesprit and Dawn were able to help calm down Dialga and Palkia and save the world from destruction. Afterwards, Mesprit said goodbye to Dawn and went back to sleep in Lake Verity. 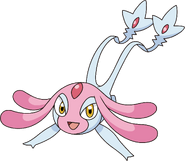 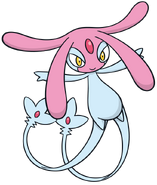 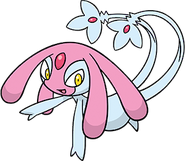 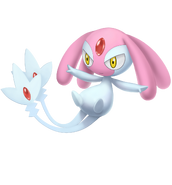 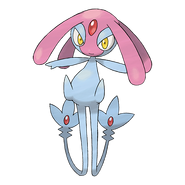 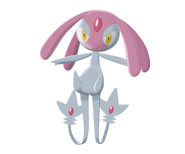