Meowzie's owner in other languages

Meowzie's owner is a character in Pokémon: Indigo League.

Meowzie's owner was a rich lady who took care of her Meowth, Meowzie, treating Meowzie to everything she wanted and even keeping her Meowth in a Poké Ball covered with diamonds.

When she ran out of money, however, she released her Meowzie in the streets of Hollywood and tearfully told her “Good luck, darling!” before getting into her car and taking off, leaving Meowzie behind. 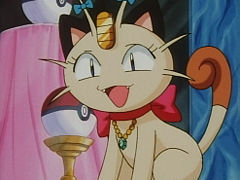