Meltan (メルタン, Merutan) is a Steel-type Mythical Pokémon revealed in Pokémon GO and in Japanese on the official site for the Let's Go Pikachu and Eevee Switch games, which are Kanto region Generation VII sub-set pairs part of the main series.

Meltan is a small Pokémon with a gold head, which resembles a hex nut, and a glossy silver body. A black sphere floats in the center of Meltan's head like a magnet; the sphere itself is Meltan's eye. A red cable sticks out from Meltan's back, acting as a tail. Its hex nut head can also spin and it is revealed to be the primary source of Meltan's eye power.

Its shiny form has a light brown color on its hex nut head and a blue cable tail.

Meltan's body is made out of liquid metal. This allows Meltan to corrode any metal and absorb it into its own body, eventually becoming an indirect predator to the Steel Pokémon with metallic body, such as the Magnemite evolution line. In addition, Meltan generates electrical energy from the metal it absorbs; it uses the electricity as an energy source as well as an eye beam attack version of Flash Cannon, which it releases from its eye. Meltan cannot stand extreme heat, due to it being weak to the Fire type. Ironically, it can walk underwater although it is also weak to said type. Additionally, Meltan can contact the rest of its kind to its current location when its bodies vibrates by the result of contacting with any soundwave-related metallic items like school bells nearby, just as its head spins much faster.

Meltan can be very curious, showing interest in many things. They also spin their hex nut heads a sign of affection towards others and when happy.

In Pokémon GO, Meltan evolves into Melmetal when it is fed 400 Meltan Candy. In the main games, it cannot evolve at all. Therefore, the Eviolite has no effect on Meltan.

In the anime, Meltan evolves into Melmetal by combing with it own species.

Meltan first appeared in Pokémon the Series: Sun & Moon - Ultra Legends. Prior the species' full appearance in A Grand Debut! and starting plays major role from Show Me the Metal!, three Meltan made cameo appearances in Evolving Research! as silhouettes, where they were sealed within a small crate beneath the underwater nearby to escape from that crate, unsealing the Hex Nut Pokémon off-screen. When Ash and his classmates are finished with their School trip from Poni Island back to Melemele Island, there are more than three Meltan whose coming along as well, infiltrating beneath the said ship to the latter island. Once they reached Melemele Island, they made hug mistakes on attempting to eat any metallic substance while separating into two groups due to being scared away by an Alolan Rattata, one group almost kill one of the Steel Pokémon with metallic body like a passing by Magneton before being counterattacked by its Thunder Shock, then eating one of Team Rocket's items such as James’ bottle cap collections, while another Sophocles’ metallic tools that were originally used for his experiments at Pokémon school through finding its Ultra Guardians underground base.

A Meltan whose with its group at Pokémon school began to show interest in Ash's Rowlet and joined him due to his debt on retrieve its hex nut head back quickly before a Murkrow steals it, while the rest of Meltan, including their fellow group that invaded Team Rocket's hideout located in Bewear and scared away by the den owner for their trouble, began to reside at Ultra Guardians base with Lusamine's Clefable they first encountered before meeting Ash and his friends, with Clefable manage to make them behave themselves from causing trouble on eating someone's metallic items, acting as their parent and teach on the next day. This Meltan has its hex nut color contrast toned down by the result of Team Rocket unknowingly using its hex nut for their mobile donut truck hideout. In Got Meltan?, this Meltan whom Ash's Rowlet befriend, has officially joins Ash on his journey.

As of Final Rivals!, Ash's Meltan and its fellow hordes fuse and evolved into a singularity Pokémon, Melmetal, at night before the next day's final Alolan Pokémon League, thus retained the original hex nut color tone on Ash's Meltan side part.

Meltan comes from the word melt, metal, -tan (a Japanese suffix meaning small), tantalum (a kind of metal) and molten (a material that can be easily melted, like steel). 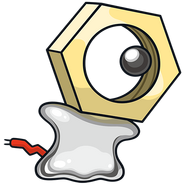 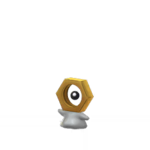 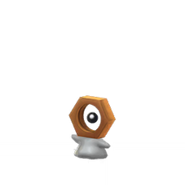