Melony is a character that was introduced in Generation VIII. She is the Gym Leader of Circhester and specializes in ice-type Pokémon. She can only be fought in Pokémon Shield- in Pokémon Sword, her son Gordie replaces her as Gym Leader (though he specializes in rock-types instead of Ice- types).

Melony is a large, plump woman with fair skin, blue eyes, and lightly painted fingernails. She has voluminous light grey hair that falls to her hips, along with a greyish-blue streak and a single unruly bang. For clothing, she wears thick clothes suitable for cold weather. Her outfit consists of a white turtleneck sweater with the ice-type and Gym Challenge symbols on it, a puffy white scarf, and a large white wool hat. She also wears blue-gray tights with white patterns and white shorts with a black design, her Gym number, and the ice-type symbol on them. To complete her outfit, she wears long white boots and a white and black glove on her right hand.

True to her name, Melony is usually a sweet lady. In terms of her Gym, however, she seems rather calm and reserved. She trains in a strict way analogous to the Spartan method, and it's speculated that her battle style is influenced by a bicker she had with her son Gordie.

However, Melony doesn't seem to take losing well, as when she is defeated in battle, she talks about how she apparently wants to crawl in a hole. 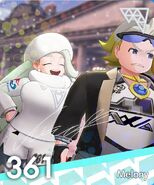 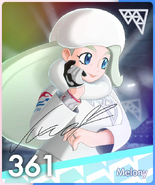 Add a photo to this gallery
Retrieved from "https://pokemon.fandom.com/wiki/Melony?oldid=1262069"
Community content is available under CC-BY-SA unless otherwise noted.