Undiscovered
Melmetal (メルメタル, Merumetaru) is a Steel-type Mythical Pokémon. It is the evolved form of Meltan, and can only be obtained through the GO Park in Let's Go, Pikachu! and Let's Go, Eevee!. It has a Gigantamax form that is only obtainable via transferring Pokémon from Pokémon GO to Pokémon HOME.

Melmetal was thought to be revered by humans many years ago because of its ability to manipulate and create metal from nothingness. However this was not shown in any media so far.Melmetal was considered a sacred being that lived in a secluded area deep within a wooded land that was full of sedimentary rocks rich with magnetite. When Melmetal reaches the end of its life, it will rust and split itself into multiple Meltan from the small shards left behind. The process of evolution has hardened its body, making it incredibly sturdy. However, it is still in a liquid state and has some flexibility, particularly in its arms. The strength of the heavy hex nut arms comes from the centrifugal force, which allows Melmetal to have the strongest punch of all Pokémon. Melmetal is said to be created when one strong Meltan absorbs the group it lives with in order to evolve.

The liquid part of its body is rather flexible, as shown when using its signature move, Double Iron Bash.

In the games, Melmetal evolves from Meltan with 400 Meltan Candies. This evolution can only take place in Pokémon GO; in the main series games, Meltan cannot evolve. Melmetal volve.

In the anime, Melmetal evolves from Meltan by combing with its own species.

Ash's Meltan and its fellow hordes merged and evolved into a Melmetal during the final Alolan Pokémon League in Final Rivals!.

Melmetal's head and hands are based on a hex nut. Its body is made up of liquid metal, similar to mercury. Its giant body structure, great power and status as a god-like being may reference the golem. Its liquid body, single eye, robotic nature, and ability to break into smaller units is similar to the various "Devil" bosses from the Mega Man series.

Its Gigantamax Form may be based on a giant or cyclops.

Melmetal and its Japanese name, Merumetaru, come from "melt", "metal" and possibly "element" or "mercury." 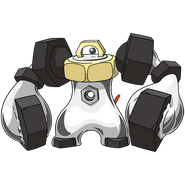 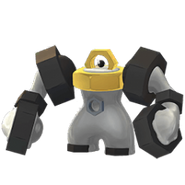 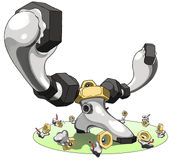