Meganium (Japanese: メガニウム Meganiumu) is the Grass-type Starter Pokémon of the Johto region, evolved from Bayleef and Chikorita.

It looks like a green Brachiosaurus dinosaur with a pink and white flower around its neck. It has two long, yellow antennae on top of its head. The flower has the ability to calm people and can release toxic pollens, and unlike previous forms, it lacks the leaf on its head and thus, its means of attack has changed from shooting leaves and slashing to using solar attacks shot from the yellow antennae on its forehead. During a battle the smell gets stronger as it attempts to calm its enemies. It also has small, pointed claws on its feet.

The females have shorter antennae than males.

It has an outgoing and friendly nature. It is known to be a peacemaker in the anime.

Meganium's ability is Overgrow, which raises the power of Grass-type moves when its HP is low. Its Dream World ability is Leaf Guard.

Meganium is the evolved form of a Bayleef starting at level 32. It is the final evolutionary form of a Chikorita.

Trainers with a Meganium 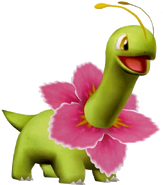 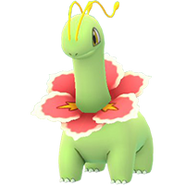 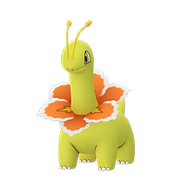 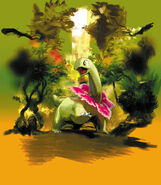