This ring contains an untold power that somehow enables Pokémon carrying a Mega Stone to Mega Evolve in battle.
Mega Ring is a key item in X and Y that allows Mega Pokémon to evolve. It can be received by Korrina at the Tower of Mastery after defeating her in the Shalour City Gym. It only allows one Pokémon to use it per battle. Alain also wears the Mega Ring in the anime.

Known trainers with a Mega Ring 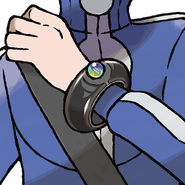 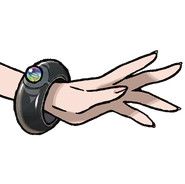 Alain's Mega Ring in the anime.
Community content is available under CC-BY-SA unless otherwise noted.
Advertisement