McCann in other languages

McCann is a character appearing in Pokémon: DP Galactic Battles.

He is described as the air battle master, considering how quick he defeated his granddaughter's Chimecho easily with his Scizor. Ash and his Gliscor battled him twice and lost, though the second time Gliscor came close to victory with Giga Impact. Gliscor was then training under him before the Sinnoh Pokémon League. 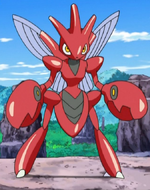