Maylene is a character appearing in Pokémon the Series: Diamond and Pearl, who is the Gym Leader of Veilstone City in the Sinnoh region.

This section, or a part of it, has been transcluded from Maylene; any changes involving it should be made there instead. /

Maylene is a young, skinny girl with pale skin and short, pink hair. She wears a sleeveless purple and black top and plain, white pants. She also wears blue fingerless gloves on her hands. Her feet and arms are bare. She wears two bandages, one on her left arm, and one covering her nose.

The name Maylene comes from "melee" and "lean".

Her Japanese name, Sumomo, comes from "sumo" (as in sumo wrestling) and, following the plant-based naming of Gym Leaders), 李 (sumomo, another name for the Japanese plum).

Maylene battled Paul in a Gym Battle, but lost that battle. Paul stated Maylene was a bad Gym Leader, which made her doubt herself if she was worthy enough to continue being a Gym Leader.

Maylene was training with her Lucario, until Paul's Electabuzz started attacking. Maylene wanted a break, to which Lucario attacked her, since it didn't approve of her lack of confidence. Her Gym assistants wanted her to return to the Gym, but Maylene refused, thinking herself as an unworthy Trainer, and ran off. Dawn felt the same way, and spoke with Maylene. She confessed that she, too, felt she would give up on Contest performances, due to her loss, but instead decided to work harder. Maylene was uncertain, to which Dawn reminded that Paul has always been described as a grouchy jerk and who doesn't show sportsmaship towards any his Pokémon. Maylene was unsure what to do next, to which Dawn proposed a battle against her. The two returned, seeing Ash battling Reggie, which slightly inspired Maylene. Ash wanted to challenge Maylene, but Dawn stopped him, as she wanted to battle Maylene first.[1]

However, Maylene expressed she would like to battle Dawn the day after, to which Dawn complied. Moments later, Maylene and Lucario meditated before the upcoming battle, even if Maylene was getting hungry. Lucario was angry at her, but Maylene swore to take the training seriously. The next day, Maylene had her battle with Dawn. The plan for Dawn was to lose yet give it her all to get Maylene's confidence back. Maylene had Meditite counter Buneary's moves and strike it with Drain Punch. She knocked out her Buneary but lost to her Ambipom. Maylene then pointed out that Dawn treated the battle like she did a contest. During the battle between Piplup and Lucario, Maylene was starting to get back in sync with her Pokémon. She beat Dawn and got her confidence back, having overcome her fears. She decided to continue being the Gym Leader, and accepted Ash's challenge.[2]

She later had her Gym Battle with Ash, using Machoke against his Staravia. While Machoke managed to block some of Staravia's attacks, it was easily defeated by its Aerial Ace. Maylene then sent Meditite, whose Detect and Drain Punch proved to be a match for Staravia. When Staravia got confused by Confusion attack, Ash swapped it with Chimchar. Chimchar went to execute Scratch and Flamethrower, but it, too, got confused by Confusion. Ash then returned Staravia, whose Brave Bird defeated Meditite. As her final Pokémon, Maylene sent Lucario, whose Metal Claw immediately defeated Staravia. Chimchar also had difficulty, but landed a hit with Flame Wheel. However, when it got paralyzed by Force Palm, it was stopped from using Dig by Bone Rush and Aura Sphere.

Ash sent Buizel as his final Pokémon, who attempted to overrun Lucario with speed, using Aqua Jet. The two clashed, and as Buizel learned Water Pulse, it collided with Aura Sphere. During the battle, the rooftop was damaged, letting the rain in, triggering Buizel's Swift Swim ability. The two Pokémon clashed with one another, using Force Palm and Aqua Jet. In the end, both Pokémon fainted, and this battle ended in a draw. However, Maylene felt so good, admitting this was the best battle she had, and believed Ash deserved the Cobble Badge.[3] Maylene's Gym Battle, to earn the Cobble Badge, was remembered by Ash, Dawn and Brock, as they were going to Snowpoint City.[4] When Team Galactic invaded Veilstone City to collect the meteorites, Maylene and Lucario came to stop their activities. The next day after Team Galactic fled, Maylene bid the heroes farewell, promising to watch Dawn's performance in the next Contest.[5]

Maylene also appeared in the ending scene of the 13th Pokémon movie, along with her Lucario.[6] 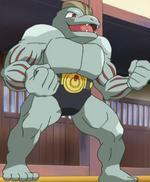