Maylene is a character appearing in Pokémon Adventures, who is the Gym Leader of Veilstone City in the Sinnoh region.

Maylene is a young girl with pale skin and short, pink hair. She wears a sleeveless purple and black top and plain, white pants. She also wears blue fingerless gloves on her hands. Her feet and arms are bare. She wears two bandages, one on her left arm, and one covering her nose.

Maylene is a strict individual, who has a specific diet of eating one berry per day. She is also very determined girl for her age, who does a lot of psychical training.

The name Maylene comes from "melee" and "lean".

Her Japanese name, Sumomo, comes from "sumo" (as in sumo wrestling) and, following the plant-based naming of Gym Leaders), 李 (sumomo, another name for the Japanese plum).

Maylene was training with her Riolu, when she was thinking of her recent position as the Gym Leader. When she was training, she heard three children saying they would challenge her, but not before obtaining the Focus Lens. Later, Maylene was running with her Pokémon when missy had Chimler fire an attack at the tree. Maylene dodged, and looked at the tree, then jumped to the balcony where Platinum, Diamond and Pearl were. Maylene became concerned, but noticed they were all right. Seeing the Focus Lens, Maylene mistook them to be the same children that she heard earlier, and announced she would be waiting for Platinum at Veilstone City's Gym to challenge her; the group realized she was the Gym Leader.[1]

The next day, at evening, Maylene faced Platinum in the Gym battle. As the battle started, Platinum screamed that her Pokédex was gone. Since the battle already started, Diamond went to get the Pokédex, while missy continued the match. She sent Chimler, whom Pearl borrowed to her, against Riolu. Chimler tried to fight Riolu off, but went on defensive, until Riolu used Drain Punch. Missy was forced to swap Chimler with Pearl's Chatler, so Maylene sent her Meditite. Meditite executed offense against Chatler with Psycho Cut and Bullet Punch. Maylene added that Meditite, like her, ate only one berry per day, and their hunger was their greatest weapon, perfected by yoga. While Chatler defeated Meditite with Mirror Move, Maylene sent Riolu back, who used Vacuum Wave to defeat Chatler. Maylene felt jealousy towards Platinum, seeing that she had such a pretty look, and food, too. Thus, she swore not to lose to the well-fed challenger, calling her an affluent one, as her Riolu used Rock Smash to raise the rocks, and hide behind them. Platinum decided to have Chimler lose the Focus Lens, and decided to have her attention to where Riolu was jumping. Pointing her thumb, Platinum found the path where Riolu was going, and her Chimler punched Riolu, defeating it. Maylene became amazed, since she wasn't defeated in a long time, and found her father, who came to the Gym. Maylene's father admitted that he had Platinum watch him spin the slot machines, which made Maylene have Riolu use Force Palm at him for not being at work. In the end, Maylene gave the Cobble Badge to Platinum.[2]

Maylene was at the Gym with her father when she heard a loud countdown, when Saturn activated the weapon.[3] Maylene was running on Route 217, heading to see her friend, Candice, in Snowpoint City. Platinum encontered Maylene, and the two greeted each other. Maylene apologized in her father's name for the slot machines incident, but Platinum didn't matter, for he actually taught her a valuable lesson. Seeing Maylene was going to Snowpoint City, Platinum took her hand as they went to that place. Maylene muttered she was going hungry, but denied to Platinum that she said a word. Still, she was impressed that Platinum took her coat off and endured the icy weather. While Platinum was going to thank Candice for saving her from freezing, Maylene admitted she was going to see her childhood friend and train, to overcome their weaknesses. The two eventually reached Snowpoint City, but were freezing, since it was the northernmost point of Sinnoh. Moreover, Maylene pointed the path to Lake Acuity. Platinum was going there, but Maylene stated she needed permission from Candice first. Platinum bowed down to Maylene, thanking her for accompanying her. Later, Maylene was surprised to see Platinum battling Candice, as Platinum's plan was to go to Lake Acuity.[4]

Once the Gym Battle was over, Candice invited Maylene with Platinum. Thus, the three girls marched towards Lake Acuity, to face Team Galactic and stop their plans.[5] Maylene and Candice went with Platinum to Lake Acuity. To take a shortcut, Candice sent Abomasnow, who carried the trio. Candice claimed they could brag to the boys how three thin-clothed girls did such an amazing feat, which confused Maylene. The group eventually reached Lake Acuity, and noted Team Galactic hasn't arrived yet, considering the lake was still intact. However, Maylene and Riolu got hit by a Sableye, while Candice got immobilized by a Gastrodon. Candice noted these Pokémon have been trained, and she got complimented by Team Galactic's commander, Jupiter, who appeared before them.[6] Maylene had Riolu rescue Candice from the Mud Bomb, but got hit by Gastrodon. The two went to retreat from Jupiter, whose Sableye used two Shadow Sneak attacks on Riolu and Platinum's Empoleon.[7]

When the air shuttle arrived, Candice, Platinum and Maylene watched whether the Galactic Bomb would be dropped in Lake Acuity.[8] When Uxie emerged, Jupiter went to capture it. Maylene's Meditite used Power Swap, followed with Rock Tomb to attack Sableye. However, Sableye used Punishment, which defeated Maylene, Meditite and Riolu.[9] Platinum had the unconscious Candice and Maylene taken on her Rapidash. Due to the harsh winter climate, Platinum had them all taken inside a temple. She hoped that they'd warm up soon, as Rapidash was sharing its warmth, and was disappointed that neither of them managed to stop Jupiter, and the utter shock and exhaustion made her fall asleep.[10]

Maylene and Candice woke Platinum up, as they were at the Pokémon Center. The two girls were grateful that Platinum had rescued them, who remembered that she took them to a temple. Maylene assumed that was Snowpoint Temple, to which Platinum apologized to Candice, since she should've asked her about the permission to enter the temple. Candice didn't mind, but assumed Platinum was just dreaming. Maylene, however, urged them to train, as they needed to grow stronger to take on the enemy. Candice agreed, and contacted Byron, shouting that he didn't warn them how strong the enemy was. She demanded to have him find someone that could train them, to which Byron took the task.[11] The two went to a field, where they encountered Volkner. The two were surprised, since Volkner was never this early. Volkner assumed that Platinum was his challenger, but when told he was there to train them, Volkner lost interest. Still, Platinum inspired Volkner to battle her, which amazed Candice and Maylene that she persuaded him. While the battle was conducted, Volkner began gaining interest, and declared he'd have a battle with Candice and Maylene as training, but only after his battle with Platinum ended.[12]

Platinum won the battle against Volkner, and Candice and Maylene congratulated her on winning the eight badge. Since Platinum was off to Veilstone City, the "thin-clothed girls" united their hands, promising to fight Team Galactic. Thus, Maylene and Candice bid Platinum farewell, as they went to train with Volkner.[13] Candice, Maylene and Crasher Wake went through the underground tunnels to Mt. Coronet. There, they teamed up with Fantina, Roark and Gardenia against Team Galactic's commanders. The six Sinnoh Gym Leaders introduced themselves, which frustrated Team Galactic's commanders. Still, the trio decided to take them on, so Maylene joined Candice to fight Jupiter.[14]

Maylene and Candice faced Jupiter, whose Tangrowth went to use Natural Gift. However, Maylene's Riolu used Aura Sphere and Candice's Abomasnow fired Ice Shard, which defeated Tangrowth and Jupiter. The two girls cheered, as they fulfilled Platinum's oath that they'd defeat Jupiter. They went with the rest of the Gym Leaders to the stairs to reach Cyrus, but space and time was being warped, and prevented them from reaching him. Thus, Byron had the Gym Leaders go underground, where Professor Rowan gave them instructions on how to reach Cyrus. Thus, the Gym Leaders went through the tunnels and emerged from the ground where Cyrus was. Candice had her Abomasnow damage the Red Chain, in hopes of destroying it. Cyrus sent his Pokémon to stop them, but the Pokémon endured, until the chain snapped. Cyrus held the destroyed Red Chain, and since he could no longer control Dialga and Palkia, he shouted at the Gym Leaders that he won't forgive them.[15]

The Gym Leaders were defeated by Dialga and Palkia, who went on a rampage. They went unconscious, and were soon found by Cynthia and Platinum. Maylene wanted to assist Platinum. She gave Volkner's Pachirisu to her, as Volkner deemed Platinum worthy to have it.[16] Per Cyrus' plan, the Gym Leaders were deemed as incomplete, and were pulled to the hole, created by Dialga and Palkia. Diamond, Pearl and Platinum tried to pull them to the ground, but failed. However, a Regigigas appeared from Platinum's bag, and lowered the Gym Leaders down to the ground.[17]

With Cyrus defeated, the distortions of space and time stopped. With nothing else left, Diamond, Pearl and Platinum placed the Gym Leaders on their Pokémon, and went to take them to the hospital.[18]

Looker and Platinum remembered Maylene, due to her powerful status, for she was connected to the rest of the Gym Leaders, as well as the Elite Four and Frontier Brains of Sinnoh region.[19]

After the conflict between Dialga and Palkia had ended, Maylene was taken to the hospital, where she was recuperating.[20]

Maylene and the rest of the Gym Leaders had recovered, and went to Byron, who awaited them with open arms.[21] 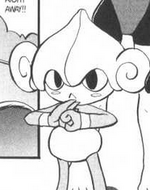