Maxie is the boss of Team Magma.

Maxie is a tall, thin man with red chin length hair that curls outwards at the ends.

Maxie wears a robe, which has a left black and right red sleeve, as well as having the Team Magma logo on the chest. He also wears long straight leg black trousers and black boots.

Maxie's appearance remains the same as it is in Ruby and Sapphire.

Maxie wears a black shirt and red shorts, and a black-red lab coat with Team Magma's emblem on both sides. He also wears a red suit under his clothes and red boots. Maxie wears glasses with black frame, and it is where his Key Stone lies.

On the outset, Maxie is seemed to be a calm and smart man who believes that expanding the land is the best way for the world to live better. But when facing anyone who appears to be an obstacle from impeding him from accomplishing his goal, he will mercilessly try to finish the person off.

In Ruby, he first appears in the Oceanic Museum, talking to the player after defeating his two grunts. He then appears in Mt. Chimney, using the meteorite's power through a machine. When the player gets behind him, Maxie will challenge him/her to a first boss battle. His next appearance is at Mt. Pyre, where he steals the Blue Orb from the mountain top. He then appears with Tabitha in the harbor of Slateport City, where they escape inside the stolen submarine on their way to the Magma Hideout in Lilycove City. He finally appears in Seafloor Cavern, where the player has found Groudon asleep in the magma. When he approaches, he will tell him/her that he gets surprised and challenges the player to a real final showdown. After admitting defeated, he comments that the player is gifted and uses the Blue Orb from Mt. Pyre to awaken Groudon. After learning from his mistake, he returns the Blue Orb and exclaims the player that he/she had taken care of Groudon and leaves, indicating that he and his team are never seen again.

In Sapphire, he appears with two grunts at Meteor Falls on pursuit of Team Aqua. He then appears at Mt. Chimney, battling three Team Aqua Grunts with his Poochyena. He then thanks the player after taking care of Team Aqua for him. He finally appears in Seafloor Cavern, alongside his two administrators, Tabitha and Courtney, exclaiming that Kyogre has finally been awakened. He then takes the player to Route 128 to see the disaster.

In Emerald, his role is the same as the originals, with the exception of the second battle in the new Magma Hideout, and the final battle at Mossdeep Space Center, with Tabitha in a tag battle. At Sootopolis City, he and Archie are trying to stop the two Legendary Pokémon from fighting each other. After their feud ended both team leaders return their orbs to Mt. Pyre and leave and neither team are seen again. 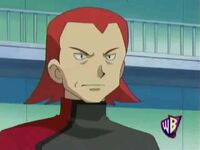 Maxie in Pokémon the Series (anime)

He battles alongside Tabitha at Mossdeep Space Center.