Pokémon Wiki
Register
Don't have an account?
Sign In
Advertisement
in: Male characters, Pokémon the Series characters, Articles with incomplete sections,
and 3 more

Max is May's younger brother and is one of Ash's traveling companions throughout his journey in the Hoenn Region. Since he is underaged to be a Pokémon trainer, he frequently just befriends Pokémon without actually owning any of them.

Max is a small young boy. He has short, black hair and brown eyes, much like his father. He wears a money-green-colored T-shirt with a white collar and button, charcoal-colored shorts and green, black and white slip-on shoes without (or no-show) socks. He also wears black, framed half-moon glasses.

Max may not be old enough to be a trainer, but that hasn't stopped him from learning all he can about Pokémon before he starts his journey. As a result, he knows much more compared to May, who didn't even know the names of her starter Pokémon's moves. Despite acting mature, Max is prone to being childish should it benefit him.

Max has some top notch theoretical knowledge about Pokémon, despite his age, and is very good at navigating through his PokéNav, even though they sometimes get lost or if the PokéNav is unable to help them out.

They are his and May's parents. Max cares for them a lot, especially his dad who he looks up to also he wants to be just like him someday. Max was the most upset when his dad lost to Ash in their gym but was calmed down by his friends, May, mother and his father.

Even though they fight a lot due to being brother and sister, Max does care for May and would do anything to try to make her happy. However, Max never misses a chance to tease May.

Max sees Ash as a big brother figure due to having a fondness for Pokémon and they are seen doing the most together while May and Brock are shopping in some towns. Max and Ash are also best friends.

Max does get annoyed when Brock falls in love with girls, but he does respect his knowledge for Pokémon and because of that he sees him as a mentor to help become a really great trainer someday, so Max and Brock really are great friends. He eventually ends up replacing Misty's role in pulling Brock away whenever he tries to flirt with a woman.

Max grew a little close to Misty, also he admires the way she pulls Brock away from girls during which he admired so much he did it himself after she went back to Kanto. Max and Misty share of being the youngest sibling, but promised to look out for them no matter what, shown when they got separated from everyone.

Max is a genius in the theory of Pokémon training, despite being too young to receive a Pokémon when he first appeared. Both May and Max are the children of Norman, the Gym Leader of Petalburg City and his wife Caroline. Just like any other siblings, May and Max do argue a lot and get on each other's nerves, but nevertheless, they're very close and genuinely love and care about each other, and May's been shown to be very protective of Max. May sometimes gets mad about the fact that Max knows a lot more about Pokémon and training than she does despite not being old enough to be an official trainer. He decided to travel with his older sister and Ash to see even more Pokémon

When Ash arrived at the gym without May in Petalburg City, he was met by little Max, who was surprised to meet a trainer who he had watched on television only weeks ago, through participation in the Johto League Silver Conference. But he also mocked him for losing in the quarter finals of the tournament. He also criticized May for choosing a Torchic as her starter, saying that if he were old enough to be an official trainer, he would've chosen a Treecko.

During his travels with his sister and his friends, Max was in charge of May's PokéNav, acting as a guide. Later on in the series, Max makes a habit of pulling Brock's ear when he sees and talks to a pretty girl, halting his romantic advances as Misty did in Kanto and Johto and the way Croagunk would Poison Jab Brock in Sinnoh for similar effect, dragging him off once incapacitated by the poison.

In the movie Jirachi: Wish Maker, Jirachi partnered with Max, becoming his first Pokémon. In Do I Hear a Ralts?, Max rescued a Ralts that was hurt and took the job of returning it back to its family, Gardevoir and Kirlia.

In Battle Dimension, Max made a brief cameo appearance with his parents watching May compete in the Wallace Cup, and also appears in a photo Brock had in the second Diamond and Pearl Special Episode. 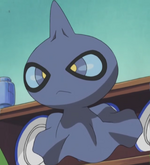 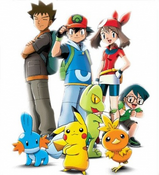 Max and Ralts (Do I Hear A Ralts?)