Matt is a tall, muscular man, who wears blue gloves and blue pants. Notably, Matt wears no shirt, and has the Team Aqua logo painted on his chest.

Matt has brown hair. He wears a blue bandana around his head, which has the Team Aqua logo engraved on it. He wears a opened blue vest and black shoes.

Matt's appearance remains the same as it is in Ruby and Sapphire.

Matt, who has blue eyes, wears a black headwear around his head with several blue "teeth" around his face. His suit is torn apart. He wears white-outlined pants, with light blue details on his knees and feet. Around his neck and waist, Matt wears a yellow rope. 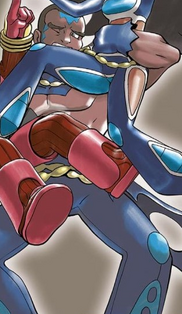 Matt in the Delta Episode in Omega Ruby and Alpha Sapphire.
Community content is available under CC-BY-SA unless otherwise noted.
Advertisement