Masquerain is a light-blue Pokémon that has no legs. Instead it has two pairs of rombus-shaped wings on its body. Its head has the shape of a teardrop. Its face is pink, it has big black eyes and small eyebrows. On each side of its head, there is an antenna, which is meant to look like an angry eye. The antennae are white with pink along the lower rim. White lines along the rim resemble eyelashes, while a large, dark pink dot in the middle represents the pupil or iris.

Due to its sensitivity, Masquerain is a weak Pokémon, but it has got two antennae on its head to scare its enemies away.

Masquerain is a really sensitive Pokémon and it is gets difficult for it to fly in the rain, because its wings and its antennae get wet. So, when it rains it usually stays under big trees to protect itself.

Masquerain is the evolved form of Surskit as of level 22, and does not evolve into anything else. 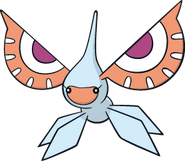