For the variant appearing in the games, see Mars.

Mars is a character appearing in Pokémon Adventures, who was a commander of Team Galactic.

Mars observed Diamond, Pearl and Platinum at a hotel, who calmed down a bunch of angry Bidoof.[1]

Mars was at the power plant, where she interrogated a worker. When Diamond, Pearl, Platinum and a girl came, Mars, lurking in the shadows, ordered them not to approach, and threatened to have Zubat attack the girl's father. In fact, she was the one that ambushed the place, to steal the electricity from the power plant. Noting the worker sent Drifloon to ask for help, Mars had Zubat attack the worker, whom Chimler punched away. Diamond tried to persuade her to stop, and performed an act with Pearl, which was about all the status effects a Pokémon can get in battle, both of them trying to figure out what the last one was. Mars then found out what they were on about and announced that the last status effect was Paralysis, getting a laugh out of it - even though Pearl berated her for ruining their routine. After this, she continued her plan, having her Bronzor use Sandstorm to bury everyone in that sand. A moment later, after Pearl, Platinum and the girl rescued the latter's father and Diamond (who ended up unconscious), Mars announced her plan was complete. Her Electivire drained the electricity from the power plant. Without further ado, she had Purugly slash through a windmill, and she flew off on it.[2] Before she left, she told Pearl that she liked the comedy routine, and said that the next time they meet, he and Diamond should do one even funnier. Mars returned to the base, where she encountered Saturn. The two glared at each other, before explaining their tasks. Mars showed she succeeded in her task to steal electricity, and showed her Electivire, who was releasing it to complete the Galactic Bomb. Saturn explained his mission to obtain the funding was still in progress.[3]

Mars dispatched some Yanmega to go to Professor Rowan's lab, and had a machine accompany them, so she could learn more about the Legendary Pokémon. However, her machine was destroyed by Diamond, which made Mars extremely frustrated that she accomplished nothing by observing from the distance. However, she became pleased that the aircraft was above Lake Verity. A moment later, she and Team Galactic grunts descended down, and she used a device to monitor the lake. While Mars was pleased about the day to blow up the lake, she reminisced herself that only Cyrus could give the order whether Lake Acuity, Verity or Valor would be blown up.[4]

Mars had Zubat threaten Johanna, and blackmailed Diamond, whom she encountered at the lake, to drop his Poké Balls.[5] Mars forced Diamond to drop all of his Poké Balls to the ground. She also suspected Diamond would be one of the kids trying to stop Team Galactic's plans, and reminded him of the Valley Windworks, where they had their first encounter. Diamond demanded his mother to be released, but Mars reminded him that he was in no position to bargain. She took his hand to watch the Galactic Bomb drop. Diamond unhanded himself, claiming that there was nothing interesting about watching the lake explode. Mars was a bit disappointed, and had Bronzong use Gyro Ball at Diamond. However, Diamond's mother took the opportunity to spray Zubat with some liquid. Diamond sent his Drifblim and flew up, and yelled at his mother to meet Sebastian and Roseanne at the carriage. Mars became annoyed, more about Diamond's words that the bomb explosion was not interesting. She and Yanmega flew up, so the latter used U-Turn to hit his Drifblim. Since Drifblim endured the attack, Mars' Puruguly used Shadow Claw to inflict more damage. When the air shuttle arrived, Mars ordered the grunts not to let the Emotion Pokémon escape, once the bomb would explode.[6]

However, the bomb was not dropped, which made Mars suspect it was blown up on a different lake. However, she did see the Emotion Pokémon, Mesprit, emerging from the lake.[7] Mars noticed that the other two air shuttles went to Veilstone City, and assumed that the other two Lake Guardians have been captured. Thus, the restraint emitted a net that captured Mesprit. Diamond went on the net, and sent Tru, who used the super-fast Razor Leaf. Mars predicted he'd use that move, so Diamond's Tru used a normal Razor Leaf, which distracted Mars. When Mars opened her eyes again, she noticed that Diamond and Mesprit had gone missing, and there were two splashes in the lake. With the air shuttle moving away to Veilstone City, Mars assumed that Mesprit was captured, while Diamond fell in the lake. She laughed, and had her grunts assemble, as the windmill flew off.[8] Mars didn't check that Diamond went into the air shuttle, and assumed that he had fallen, along with Tru and Kit, into the lake.[9]

Mars met up with Saturn and Jupiter at Veilstone City, and the trio went to Cyrus to report the success of the mission. Cyrus became pleased, and had the commanders assemble the grunts at the auditorium. They did so, and listened to Cyrus' speech about the incomplete world and the Red Chain, and clapped for him.[10] Mars reported an intruder in Veilstone City. Cyrus ignored that, and asked of his commanders to go to Spear Pillar at Mt. Coronet, who obeyed that command.[11] The three commanders were at the Spear Pillar, and were pleased that the final phase of the plan would soon start. They saw Cyrus, and were surprised that he was badly wounded. Saturn simply glared them, and asked if there were any disturbances, to which the commanders denied. Cyrus went to conduct the plan, while the commanders defended him. Mars was attacked by vines, but her Purugly defended her. The trio soon noticed Roark, Gardenia and Fantina, and belittled them, for three people were not powerful enough to stand up to Team Galactic.[12]

Jupiter, Saturn and Mars faced the Gym Leaders. Mars stated there was nothing that the Gym Leaders could do, as their plan was set in a stage that could not be stopped, as Cyrus' ritual has been completed. Much to their surprise, they saw that Byron and the Underground Man below them, who dug a tunnel for the Gym Leaders to bypass their security. The three commanders smiled, as they decided to have each one of them battle two Gym Leaders at a time. Mars faced Crasher Wake and Gardenia, and sent her Zubat, Purugly and Bronzor to battle them.[13] However, the Gym Leaders defeated Mars and her Pokémon.[14] Mars and Saturn recovered a bit, and noticed Jupiter talking with Sird. The two didn't know who she was, so Jupiter introduced her as Team Galactic's commander, who infiltrated Team Rocket. Mars reminded that Team Galactic did collect many Pokémon linked to space itself, while Sird explained her mission was to capture the space Pokémon Deoxys, but had failed. She showed that she had a grunt take her place of operations in Sinnoh, which annoyed Saturn that she betrayed their boss.[15]

With the battle raging on, Saturn, Mars and Jupiter fled from the Spear Pillar.[16]

Mars, Jupiter and Charon were hiding in Eterna City. They observed Charon's fight, and noted with Cyrus gone, he was just trying to collect Legendary and Mythical Pokémon, and nobody could stop him. Mars refused to fight Charon, while Saturn asked Jupiter what to do. The latter looked at the hole, and stated that their boss, Cyrus, lied beyond that hole. Saturn used his machine to grab Mars and Jupiter, and flew off with the two through the hole.[17]

Saturn, Mars and Jupiter went to the Distortion World. They observed Volkner and Flint fighting Giratina. Mars wanted to team up with Volkner, thinking she'd be a match, for they both had an Electivire, but Saturn reminded her they didn't come to play. Suddenly, Charon arrived, and pretended to be here to save Cyrus. Since he was being chased, Charon flew away, leaving the Team Galactic commanders to confront Cheryl, Marley and Mira. Saturn and Mars didn't want to fight, but Jupiter leapt in, as she believed Charon that he was going to save Cyrus. Thus, Mars and Yanmega faced Cheryl and Blissey.[18] Blissey got hit by Yanmega's Bug Buzz. As it went to eat the berry, Blissey's berry got stolen and eaten by Yanmega's Bug Bite. To counter, Blissey used Sing, which lulled Yanmega to sleep. Mars became impressed, and swapped her Yanmega with Bronzonr, who used Heal Block on her Blissey, preventing its health recovery.[19] Their battle got interrupted by Giratina, who passed them by.[20]

Mars emerged from the Distortion World with the rest of the commanders. She noticed that Charon got beaten up by a toy, controlled by Rotom, and belittled him for that. She watched as Cyrus emerged, too, and confronted Charon. Cyrus announced that Team Galactic would be disbanded. As he went away, Jupiter stopped Cyrus, for they dedicated their lives to Team Galactic, and had nothing do without it. She called upon Mars and Saturn, who were pondering thoughts. Thus, Cyrus had them taken on Magnezone, and thanked Diamond, Pearl and Platinum before the group flew away.[21] 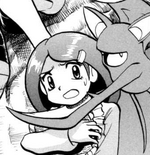